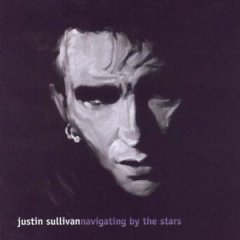 What a great surprise it was to discover that Justin Sullivan, from the marvelous English band New Model Army, and his wife, poet/novelist, Joolz, planned an impromptu show in San Francisco on an evening when I was scheduled to be in the city myself. This was sheer luck for me, and a wonderful shock to read the bulletin post on MySpace announcing this rare event, just a few weeks before the show. It turned out that Justin and Joolz spontaneously scheduled two intimate concerts while on holiday in California, probably through friends as a means to subsidize their transcontinental airfares. Regardless of the scenario, it made for an astonishing night that thoroughly blew me away.

As I sat amongst a fortunate handful of people with an enormous glass of Irish whiskey in hand, Joolz sauntered onto the stage to begin the performance. There were only about fifty people who fit into the minute venue bizarrely known as The Legion of Decency. She read about five prosaic compositions that were either short stories or poems, interspersed with anecdotes about the inspiration behind each piece. The last of which was entitled "Born Dead," about how at the age of 51, she learned that she had been born without a beating heart. Her material was beautifully delivered, convincingly strong and original. The poignancy and the cathartic nature of Joolz's writing was projected into the minds of the audience, who never become restless while waiting for Justin Sullivan to arrive onstage.

When he did appear, nonchalantly and without a shred of pretence, he picked up his acoustic guitar and went straight into "The Changing of the Light" from his stellar solo LP Navigating by the Stars. Justin Sullivan is one of those rare artists who has managed to retain his artistic integrity throughout a twenty-eight year career, which in itself is so utterly commendable as it is nearly impossible to find any of your favorite musicians who have not suffered from some form of creative slump during their career. His passion for his music, which is a fusion of folk, soul, rock and punk, is simply incredible. I would highly recommend anything by the band he originated, New Model Army, and his solo album is an underappreciated masterpiece as well.

From Navigating by the Stars, he performed a song called "Sentry," one of my favorites from the album. It sounds melodramatic, but this song is so moving to me personally that every time that I listen to it, my eyes nearly well up with tears. This music is that exceptional, and Sullivan's voice is so technically and emotionally compelling that it is almost beyond compare. Other fan favorites from his solo record that were performed were “Tales of the Road” and "Ocean Rising," the latter about his inexorable love for the open water and the remarkable power it possesses.

The bulk of the rest of Sullivan's set was selected from New Model Army material. "Another Imperial Day," the political tour de force from their 2005 album Carnival, was performed as an almost scat-like a cappella. The only accompaniment was the driven pounding of Justin Sullivan's left foot for percussion. "No Pain" was also performed in the set. This song resembles a Neil Young acoustic number, circa Rust Never Sleeps, but is tempered by more emotional vitriol as Sullivan sardonically recounts the Biblical tale of Abraham and his son, Isaac. The set was closed with "Fate," from 1993's impeccable The Love of Hopeless Causes. In this song, Sullivan passionately sings such lines as, "I'm singing out to the Gods who couldn't care less / Come on and get me if you can." This poignant piece celebrates individual strength while challenging the narrow mindset of so many organized religions.

Without going on incessantly, I have to say that this was one of the best shows that I have ever witnessed. As a band, New Model Army is in a league of its own. If I had to describe them, I would say that they resemble a blend of The Clash, Killing Joke, Neil Young and at times, The Cure. However, there was something so unadulterated and stripped poverty bare about Justin Sullivan on his own, that it floored me beyond expectation. His unswaying honesty and disregard for public approval moves him to create music that is unfettered by commercial shackles, but is at once appealing in its raw soulfulness. In fact, it could (and should) break through mainstream independent radio at some point. Consider attending the upcoming New Model Army show at El Corazon in Seattle. The full band will be playing on Sunday, April 6th. I'll see you there…