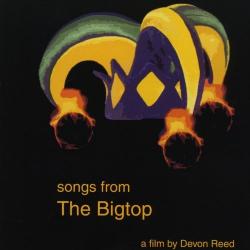 I suppose it must be nice to be a one-man show. Devon Reed, the creator of the movie Bigtop, not only wrote, directed and starred in the movie, but he took it upon himself to write all the songs on the darn soundtrack as well. Now, this would all be just a point of interest to the cinematic obsessives if it wasn’t for the fact that Mr. Reed was able to cajole a veritable modern rock all-star team to record his songs, including the likes of the Clientele, Tullycraft, Doug Martsch and Matthew Sweet. How he got this magic to happen is beyond me, but the occasional TIG reader has put together a pretty respectable soundtrack to his upcoming flick.

I have to say, I really don’t know much about the movie beyond the synopsis that the main character “runs away with the circus, only to become consumed by his desire for power and the love of a woman,” which on one hand sounds like fun and on the other hand could also work as a synopsis of Steve Martin’s The Jerk. (Anyway, to me, circus movies began and ended with Big Top Pee Wee). However, this is not a movie review, this is a music review, and the music contained on the soundtrack leaves me with plenty to say.

I’m not really sure what to make of the idea that many times on the compilation, the bands are able to turn Devon Reed’s songs into their own – is this a sign of the prowess of the artist or the fact that the songs are easily morphed into new works due to their simple nature? This is not to belittle them, but rather to act as a jumping off point for the disc. The Clientele’s “Your Song” pretty much sounds like what you might expect from any Clientele song, just like Damien Jurado’s “Ashes” sounds like a Damien Jurado song. Is this bad? No, not really, but you don’t really get the idea that Reed has a singular musical vision for the soundtrack. That being said, I’m going to try to have my cake and eat it too by saying that in the end, a lot of the songs are just a little bit too similar to make the soundtrack compelling from start to finish.

Sure, there are a number of high points. Matthew Sweet’s contribution, “Wild,” is the best thing Sweet has put to tape in a long time, with Matthew channeling the late Warren Zevon at points, adding a little raspiness to his signature smooth voice, but he still sticks with the wall-to-wall guitars that broke him on Girlfriend. “Cracked and Crazed,” performed by Doug Martsch, is a quiet ballad that is one of a number of tracks that can be bunched together, including Tullycraft’s contribution (“The Girl Who’s Above Us”) and the Owls’ “I Just Can’t Keep Up.” These songs are almost interchangeable, but Martsch brings a little more to the table that the latter two. Only the Sprites’ closing number, “Patience,” seems to really take the music to a different place, turning the song into a synth-pop number that is ultra-cute, a counterpoint to the straightforward modern rock the dominates the soundtrack.

Now, before you get the idea that I didn’t really like the soundtrack, I have to say that on the whole, I did like quite a bit of what I heard. However, what it really lacks is much variation and dynamism, especially considering the lineup that Reed was able to collect for the soundtrack. Although all the acts impart their sound in one way or another, the songs, at their base, are similar enough that you feel like no one really breaks free. It is always hard to judge a soundtrack without seeing the movie, and I have to give Reed credit for taking a chance by writing all the music to his movie. Songs from the Bigtop does have some real gems, but on the whole, it might appeal to the real completists for each act.