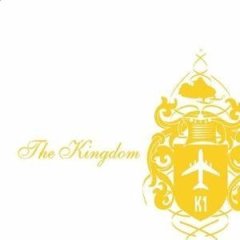 Yes, The Kingdom's lead singer and mastermind Charles Westmoreland's voice is often compared to that of Fine Young Cannibals' Roland Gift, but you're not gonna find anything remotely resembling "She Drives Me Crazy" or "Good Thing" herein. Instead, prepare for a rich sonic adventure in 25 minutes flat.

Though these songs stand well on their own, the album in fact narrates, if cryptically, the story of a racer using varying methods of transport to complete a race. This is not immediately transparent to the listener and can only be fully understood with a bit of web research. The clues that one will pick up on include the repetition of certain melodies ("Driver," "Racer," "Pilot"), repeated mention of the colors black and gold, and lyrics about snowmobiles or motorcycles or hydrofoils. But try not to get caught up in this, because it isn't necessary to know or understand this theme in order to thoroughly enjoy this album.

"Driver" opens the album, a perfect introduction in which the scene is set. It slowly builds into an eruption of strings and produces anticipation for the songs that follow. "Love Is My Nation" picks up the pace as Westmoreland croons over heavy synthesizer lines, singing "Ain't we having a ball like a beating heart" and creating a veritable pulse by vocally replaying the heartbeats into the end of the song. "Polaris" slows things back down, with only vocals and piano. It's a pretty song with a hint of sadness, but the lyrics also display a sense of hope: "Your leather snowmobile jacket fits like a dream," sings Westmoreland, placing emphasis on unexpected syllables as he does throughout the album. His vocal delivery is unusual to say the least, but that's one of the most compelling elements of the music. It may also be the thing that unfortunately turns some listeners away.

"Motorcading" begins stark, with Westmoreland repeating a nine-syllable, nine-note vocal melody from start to finish as instruments fill in around him. "Motorcycling" is one of the album's more poppy numbers, where strings and trumpet complete the full sound to make an epic-like soundtrack to one of the more transparent legs of the race theme. Next is "Racer," a continuation of "Driver" that stays soft and subdued, tying the components of the theme back together: "Tell my baby cause she ain't ever seen me, I'm the one in black and gold, the kingdom racer."

"Die All Over Me" is raucous and pounding, with a sweeping guitar solo and lyrics about oceans and lakes, Apollo 13, rainbows… I mentioned the lyrics are often cryptic, no? It is followed by "All I See Is the Sun," perhaps the most hooky track on the album. It stands alone particularly well; the verses find Westmoreland singing over bass and drums, and upon arriving at the chorus all the instruments break into a delightful frenzy while he sings, "All I see is the sun all of the time" over and over. Its energy is carried into the next song, "Higher," a song where the violin takes center stage and is perfectly placed. "Holds Hands with Giants" follows, still maintaining the high energy and pulsing rhythm that's been set by the previous songs.

"Pilot" ends the album, following the same melody set by "Driver" and "Racer" but this time a cappella, until after the vocals are complete and a march-like drumbeat wraps it all up.
This album is inspiring for its originality and depth — a great feat for such a quick listen. I urge you to set it on repeat and listen to it in order over and over, experiencing it as a whole before breaking it up into separate tracks, because the songs are great along, but as a whole it has the power to move you.