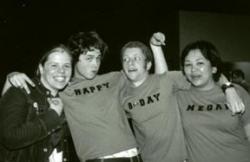 Isn't it funny how sometimes you feel like you know someone, and then, once you find out more about said person's favorite music, you find out that maybe you don't really know that person? Take Megan Seling, music writer from the Stranger, fellow judge of all things cute and off, and all-around sweetest girl you could ever know, right?

So we thought as well — until we attended Megan's birthday party this past Memorial Day, and got to see her current favorite bands Kane Hodder, Idiot Pilot, and Mon Frere play in her honor. At this point, we began to realize that under that winsome, charming exterior lies the fire of a woman who likes to RAWK until her ears bleed. To which we say, fuck yeah!

What a great bill to see at our first night at the new Paradox space in Ballard. First up, Mon Frere, who won the "most spirited" award for the night with their homemade commemorative "Happy Birthday Megan" t-shirts. They were even sweeter than those awesome vegan chocolate chip cookies someone baked for the birthday girl.

I loved them when I saw them at win the EMP Sound-Off 2004 awards, and, of course, I am BIG excited to have them play our Ladyfest showcase {mark your calendars: Saturday, June 26, 2004 at Graceland; learn more about it here}. They warmed the crowd with soaring female vocals, the zig-zagging guitars, and hot pink tees with white puffy letters that read, when they stand in the proper boy boy girl formation, "Happy Birthday Megan."

Then there was Idiot Pilot. I felt so lucky to be front row to see them. Most folks know that they have already been picked up by a very major label, right? They aren't even old enough to get into bars, and now they'll be playing packed amphitheaters before we know it… much to the chagrin of Muse, we're sure {and we hope}.

That frontboy-man Michael Harris has incredible pipes as well as onstage charisma, wriggling his low-belt-slung hips and bouncing off speakers, his huge mouth nearly swallowing the microphone whole in order to transmit the mighty power from his tiny frame. He's like Thom Yorke meets Hutch Harris meets Steven Tyler. Whoa.

Then, what can you follow up A Kid Rockstar backed by an OK, Computer? The most ROCKING, LOUD, METAL, and MAGNETIC band I've seen in a long time! KANE HODDER!

I must confess that I left before Kane Hodder's set… however, I've had their EP "Frank Exploration of Voyeurism & Violence" in ye olde car CD player since the show, and I've been quite impressed with their sound. I hear elements of the song-writing prowess of the Divorce, but with a far heavier, nearly eighties-influenced guitar, and with these incredible screams that I could call banchee-like, except that they're coming from a male.

Kane Hodder is a band well-versed in the teachings of all their hardcore forefathers. But what makes them magic to even the most sugar-addicted-poppy-fans is that fact that they don't rely on the {basic screech here} –> {falsetto here} –> {goat ears here} equation that most folks aspiring to be the next big hardcore+punk+metal thing fall prey to.

They manage to incorporate the screech + falsetto + goat ears thing, but they do it with melodic elegance. They seamlessly progress from jagged guitar rift to symphonic vocals to determined bass lines, all the while managing to meld their individualistic glories into a focused rock machine. Lead-singer Andy Moore didn't just rely on his multi-faceted vocal stylings to seduce the audience. He posed and postured and strutted across the stage. It's nearly like he went ballroom dancing with his own fury.

Also worth mentioning: Andy is quite the karaoke-r. He stunned the crowd with his showmanship twice at our 2nd Annual Rockstar Suicide Karaoke Bash, first with his rendition of Loverboy's "Workin' for the Weekend" {more cowbell!!} and next with the Divinyls' "I Touch Myself."

So to say this most eloquently… "We heart Kane Hodder. We want them to heart us."

Yep. You should seriously prioritize "See Kane Hodder live" on your indie-rock to-do list. Looks like they're touring the country most of June, ending up back in Seattle at Graceland on June 30th. They're also set to play Bumbershoot 2004, you know, if you're into that whole thing…