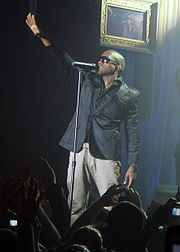 Kanye to reviewers: if you don't love me as much as I love me, don't bother (and maybe consider suicide)

Yesterday I was chatting online with a friend (and fellow rock writer) about a musician who publicly bitched about a 6.9 score they had gotten from Pitchfork and privately about a 8+ score from TIG. My point was basically, "who the hell do they think we/they are?" It wasn't as though their records were being trashed. The reviews were overwhelmingly positive – the reviewer(s) might not have gotten exactly what the artist was going for but it didn't hamper their enjoyment of said product any less.

I mention this only because Kanye West is whining again and now he's pissed at Entertainment Weekly and its writer Chris Willman because they reviewed his tour (specifically the opening night show in Seattle at Key Arena) and they gave his show a (*gasp*) B+. He wrote on his blog:

Yo, anybody that's not a fan; don't come to my show. For what?! To try and throw ya'll two cents in? Ya'll rated my album shitty and now ya'll come to the show and give it a B+. What's a B+ mean? I'm an extremist. It's either pass or fail! A+ or F-! You know what, fuck you and the whole fucking staff!!! I know I shouldn't dignify this with a comment, but the reviewer threw a jab at all the artists. I just wanna know when was the last time you enjoyed yourself. If you can't have fun and lose yourself at this tour it's a good chance you're a very miserable person. I actually feel sorry for you guys. Your job forces you to not have fun anymore. Grab a drink, holla at some nice girls, and party bitch!! You don't know shit about passion and art. You'll never gain credibility at this rate. You're fucking trash! I make art. You can't rate this. I'm a real person. I'm not a pop star. I don't care about anything but making great art. Never come 2 one of my shows ever again, you're not invited and if you see me…BOW!! This is not pop, it's pop art!

I would say that I quoted his entire blog post verbatim, except that Idolator quotes from his blog and has four additional words after "it's pop art!" and they are "Chris Willman, kill yourself!" Hmmm…wonder why that part was edited out.

This, of course, raises many important questions, but first on my mind is "who has fun at Key Arena shows anyway?"