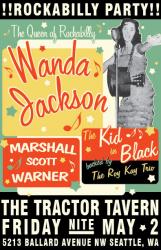 I went to see the “First Lady of Rock and Roll” and the “Queen of Rockabilly” Friday night at the Tractor, and she was very impressive (and not just for her age, 70) but great altogether. She is considered a legend and deservedly so. Yet, she was upstaged by a young man who probably isn’t old enough to have a driver’s license.

As a reporter, or so I pretend, my obligation is to find the story wherever it may be. On Friday night, though, the story was 15 year old Vince Mira.

Mira is a Spanish teenager from Federal Way who sings exactly like Johnny Cash. He recorded an EP with Cash’s son and some former bandmates that was released earlier this year. He’s gotten some considerable buzz thus far, appearing on “Good Morning America” and “Ellen” (and mentioned here by my friend Imaginary Elle before any of that).

I’ve probably seen three or 400 hundred live shows in my lifetime (the vast majority in the past five years) and have seen some pretty amazing opening acts (Cat Power open for Sleater-Kinney, Sleater-Kinney open for the White Stripes, the Yeah Yeah Yeahs open for the Jon Spencer Blues Explosion, Annie open for the Royksopp, and more and more) but I have never seen the first act on a three-band bill called back for an encore. In fact, if the sold-out crowd at the Tractor had their way, Mira and the Roy Kay Trio (who were backing him) would still be playing right now – regardless of when you read this. What was the last time you saw the first band fill an entire room?

Mira doesn’t just impersonate Cash, he inhabits his spirit and channels the Man in Black. Yet he performed enough of his own songs, which were obviously Cash-inspired, to never be referred to as a cover artist. In between songs, Mira would give a modest “thank you very much” as though he was surprised by a very generous Christmas present that he doesn’t know what to say beyond thanks.

He went onstage at about 9:20 and at that point the Tractor was packed and full (it was noticeably less full for Jackson). Mira and the Roy Kay Trio blew through probably about a dozen songs, and Cash’s songs (save for a few verses en Espanola to “Ring of Fire”) were pretty faithful. The crowd loved it when he played the more recognizable Cash songs like “Ring of Fire,” “I Walk the Line,” “Cocaine Blues” and “Folsom Prison Blues”. Unsurprisingly, you could not hear Mira over the crowd singing along to the line in “Folsom Prison Blues” about shooting “a man in Reno just to watch him die.”

Cash is an appealing artist to listen to because his songs are stories with characters that have depth. He sides with the common man and sees prisoners as people wrestling with their own demons (just as he, a notorious drug user and abusive father and husband, grappled with his own). I don’t know how a young Vince Mira identifies so publicly with Cash, but he has his act down solid. I hope he starts to write and perform more of his own songs and rely less on Cash’s back catalogue (even if those songs are truly brilliant). He’s a very likeable young man who could only grow a songwriter. It will be fun to watch the ride.

Wanda Jackson on the other hand, doesn’t have to prove anything to anyone. Watching her at the Tractor was a bundle of joy. She is a saucy woman who has been a recording artist since 1955. She dazzled the large crowd at the Tractor with stories of how one of her boyfriends, a certain Elvis Presley, convinced her to move from country music to rock and roll or rockabilly. Her voice is obvious when you hear it on the radio (most likely these days on “Shake the Shack” on KEXP on Friday nights; its host Dr. Leon Berman – the proctologist of rock and roll – introduced Jackson). It is still identifiable: high-pitched but still gravelly. She’s often been called “the nice lady with the nasty voice.”

She played for close to an hour, playing some of her own songs (“Rock Your Baby”, “Fujiyama Mama”, “Funnel of Love”) with many of Presley’s and others like Jerry Lee Lewis. All of the songs were instantly recognizable, even by the most casual of rockabilly fans. She was backed by Marshall Scott Warner and his band (who had their own set between Mira and Jackson). Warner is a rockabilly artist who has worked with Jackson in the past. Because Warner’s band didn’t have a proper name, she labeled them the “Baloney Bandits” for the night. There were a few moments were they had trouble keeping up with Jackson, but overall were pretty tight.

Friday night was quite the party. All the basses were upright, pomade was as common as cheap beer, and the music was fantastic. There was a sign in the window of the Tractor that said “Sold Out – Really”. I could easily picture (but didn’t see) people desperately pleading with the kind people at the door for “just one more ticket”. It was a night to watch a living legend and see another great artist bring another legend back to life.