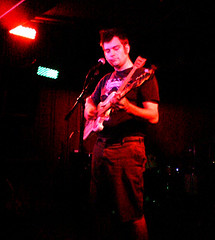 Battle Hymns were already into their second song by the time I made it through the door of Chop Suey. I grabbed a Red Bull and settled in to watch the set. What struck me straight away were the similarities between Battle Hymns' musical style and another beloved band o' mine — Silver Jews. Frontman Cameron Elliott's vocals and the songs themselves, seemed as if they were born from a pairing between the Silver Jews and Dinosaur Jr, with the barest splash of Americana for flavor. Honestly, the entire set I couldn't recall the band they reminded me most of, and when it hit (Dino Jr) it made complete sense. The melancholic tones of the majority of songs performed weren't overtly so, just enough to make the heart ache a smidge, and keep the audience engaged. I was totally impressed. I am easily distracted when watching a band I've never seen before, even IF I know people in the band, or loved other bands they were in (in this case, the Western States). But Battle Hymns sucked me in and made me a fan.

Next up was Karl Blau! I hold most K or Knw-Yr-Own or Anacortes or Bellingham bands close to my heart. But none like Karl Blau. Perhaps the Hydra, or the Microphones, but I truly become speechless and giddy when I see Karl Blau perform.
Watching him play is always slightly awkward, both for him and the audience, though this quality is part of the charm. It's always a tad more close than comfortable. Tonight's "Blausperience" was quite intimate, as it would be with anyone sporting only a bass, dingy bell, and a slew of delay pedals. There were delay pedals aplenty, and a sadly defective bell which had magic performed on it in time to chime in (as it were) for some of the songs at the end.
Karl Blau is like the best hug you have ever received, wrapped in a puppy that'is cuddly but nips sometimes when excited, doused with Anacortes-bred inventiveness, pulled together neatly with a sunshine-y rainbow ribbon.