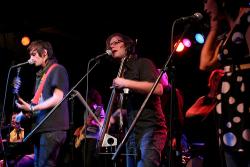 "If lunacy means communicating with God, then who would want to be sane?"

From the opening quote on their website, it's immediately clear that Kay Kay has an extraordinary approach to songwriting. The band is three members at its core: Kirk Huffman and Kyle O'Quin, formerly of Gatsby's American Dream, and Phil Peterson of Tennis Pro and the House of Breaking Glass. "His Weathered Underground" is an often-rotating cast of up to ten musicians, giving Kay Kay a huge and lush sound that translates not only live, but also in all of their recordings to date.

Kay Kay's songs feel almost like a rock opera; indeed, in an interview with the Penn State Collegian, Huffman indicates that the band's songs are based around the idea of "a fictional everyman who is slowly going paranoid schizophrenic." Mixing elements of psychedelic rock [not in and of itself this reviewer's favorite] with ragtime [seemingly not a genre that would translate well] and stretching from a horn section and dual violins to good ol' fashioned rock and roll guitar, Kay Kay manages to create instantly likeable songs that have all the appeal of pop music.

At Wednesday evening's show at the Crocodile, the stage was filled to the brim. An enthusiastic front row began dancing and singing along from the very first song. The ever-geniune frontman, Huffman, declared us to be the best crowd to date. Having witnessed nearly every show the band has played, I can vouch that it was true. The peak of Kay Kay's energy came when they premiered their new song, "All Alone." Bassist Nate Mooter [also known as Nate Lashes of Seattle band the Lashes] jumped and shouted in unison with trumpet player Robert Parker; it was a display of unified intensity that one would never guess they hadn't practiced a hundred times over.

Kay Kay won't be playing locally for a while, as they prepare for their upcoming full length album. Those looking to get their fix in the meantime can visit www.bombsoverbellevue.com to purchase the DVD of their live Pretty Parlor performance. They'll also be sharing their insane, brilliant visions with the masses in the coming months; May 18th they'll play live with Harms on 107.7 The End's "Young and the Restless," and June 13th will find them in sunny southern California for "Last Call with Carson Daly."