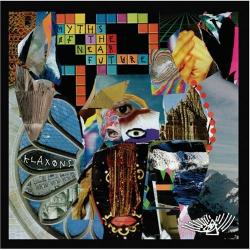 Myths of the Near Future

Based on my past track record of admiring British bands, I feel like I should feel more love for the Klaxons. This is especially true because of my checkered youth listening to — nay, worshipping — such British dance-rock bands as Jesus Jones, Pop Will Eat Itself, the Stone Roses (first album), Inspiral Carpets, Happy Mondays, Soup Dragons, EMF, Ned’s Atomic Dustbin and many other flash-in-the-pan bands. My love for them knew no bounds (heck, I have a script cover for Lysistrata signed by all the albums of Jesus Jones), yet somehow, the Klaxons leave me feeling empty, like a knockoff of the originals. That being said, there isn’t anything particularly bad about Myths of the Near Future; on the contrary, the album is a fun listen. It's full of energy and hooks but feels like it's missing its soul, like a vampire of Brit rock that never really lives up to the hype that the British Press have generated for the band.

One thing you have to give the Klaxons for is choosing an excellent name (though I suppose if you need to start a review praising the bands on its name choice you know you’re in trouble). Yet I am being overly disparaging towards Myths of the Near Future. Much of the album has a familiar sound to it, very upbeat and danceable, like its predecessors. The hallmark of bands like Jesus Jones and Pop Will Eat Itself was the mashing together of dance/electronic noise with a British punk mentality, as if you jammed 808 State and the Buzzcocks into the same act and really, the Klaxons are no different, except they have updated the sound for the 21st century. Instead of 808 State and the Buzzcocks, imagine late-90s Moby and Franz Ferdinand’s “Take Me On” fused at the hip into some sort of dance-rock monster.

The first few seconds of “Atlantis to Interzone” has an undeniable Everything is Wrong feel, right down to the kind of cheesy beat and sample that permeate the song -– and that might be its Achilles’ Heel, as it really does sound like a song from 1995. This tendency is also found in the bombastic “Four Horsemen of 2012,” a song you know you’ve heard before when you know you haven’t. The other big UK hit from the album, “Gravity’s Rainbow” (they do deserve props for the Thomas Pynchon reference), has a more modern Bloc Party sound that isn’t as anachronistic.

Luckily, they slow down the Wayback Machine for “Magick,” one of the standouts on Myths, as its rhythm is much more aggressive and vocals are more shouted than sang. The opening guitar line is twisted and distorted, mixed with the borderline frantic drumming and vocals of the verse. This suddenly breaks down into a controlled and surprisingly melodic chorus, offering a glimpse at what might be the promise the Klaxons offer. The other barnburner on Myths is “Totem on the Timeline,” filled with great examples of the non-sensical lyrics of the Klaxons: "At club 18-30 I met Julius Caesar, Lady Diana and Mother Theresa/Signs, you know I see them all the time/Time: Just a fraction of a sign." Yeah, um, okay. Nevertheless, the reckless abandon of the song is infectious.

It seems counterintuitive that a band that advertises itself as “nu-rave” might be at its best on a slow song. “Isle of Her” is a languid piece that is rich in vocal harmonies and a dark, sinister atmosphere that sets it apart from the rest of the dance-rock of the album. It almost borders on a Joy Division sort of appeal, but with a squeeze of a Pop Will Eat Itself tone; it's a high point of the album. Similarly, “Golden Skans” is a more laidback song, but instead it takes a page from the Blur playbook to mixed results, but it's a pop gem in any case.

Myths of the Near Future has some great moments that not only recall the glory days of British dance-rock, but also expand the sound in new directions. The question will be if the Klaxons are keep from sounding dating while sampling from the dance-rock/rave history of British music. Sometimes it's hard for me to sit back and listen to some of my favorites from the early 1990’s – honestly, British music from that era it just doesn’t age well, but it definitely was popular. So I expect that we’ll be seeing a lot more bands influenced by that scene. The Klaxons can now officially be the flag-bearer of that resurgence.