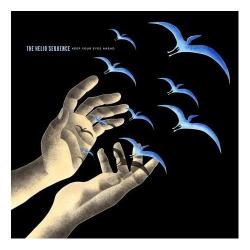 Keep Your Eyes Ahead

Where did they all go wrong? Back in 2004, Portland’s Helio Sequence released one of my favorite albums of the year, the pure modern rock confection Love & Distance. That album adeptly mixed the electronic noise-pop of the duo with skillfully crafted melodies to create a minor pop-rock miracle. Four years later, the Helio Sequence is finally getting around to releasing the follow up and, well, I don’t know what happened. I was so excited to get a copy of their new disc, right down to the great "free your pteradons!" cover art. However, Keep Your Eyes Ahead takes them even further from their neo-psychedelic roots and firmly plants them in run-of-the-mill modern rock that sounds like it is meant to please everyone, when, in all reality, probably pleases no one.

Maybe there is some sort of odd cross-pollination project going on deep in the basement at Sub Pop, like a musical chimera that would send shivers up Mulder’s spine, because that is exactly what you are greeted with on Keep Your Eyes Ahead. Suddenly, you wonder if you accidentally switched your Helio Sequence for Band of Horses album, but no, you really are hearing the devastatingly straightforward prog rock that “Lately” presents. OK, well, maybe it is just one track. Sorry, but, no; “Can’t Say No” goes in exactly the same direction, but maybe with a little more infection a la Rogue Wave or Death Cab for Cutie. At least “Can’t Say No” has some of the Helio Sequence’s signature staccato vocals, but beyond that, I wouldn’t be able to tell the different between this and anything you might hear on MTV2. “The Captive Mind” decided that what we really need is revived Duran Duran ‘80s pop, right down to the synthesizer that fits in like a size 11 foot on a size 6 shoe. In its foundation, the song is the Helio Sequence, but somehow never comes together.

Now, I don’t want to disparage the whole album, because there are a few places where Brandon and Benjamin get it right, finally returning to what makes the Helio Sequence enjoyable in the first place. “Hallelujah” is full of electro-synth magic and is a hypnotic and fascinating number with the faux-march rhythm and stream-of-conscious vocals that is the basis of the Helio Sequence. “Back to This” might be the high-water mark on Keep Your Eyes Ahead, a gentle and swirling song that is complex and nuanced like nothing else on the disc. If you want to hear what the future should hold for the band, it has to be “Back to This,” a song that is equally accessible and captivating without becoming generic.

The rest of the album seems to be populated by musical messes, like “You Can Come to Me,” whose Atari beeps and whirs are counterbalanced by the most ‘70s pop-rock melody you’ll hear in a 2008 album – the song doesn’t know what year its in. Then there is the Paul Westerberg side of the disc. “Broken Afternoon” is pure Westerberg/Springsteen balladry that just doesn’t fit in at all, while “Shed Your Love” is an attempt at a true, quiet ballad and it ends up just being boring. Ten points for attempting to expand the Helio Sequence’s sound, but minus several thousand for doing it in a very tedious way.

I suppose every band will take a wrong turn every once in a while, and hopefully Keep Your Eyes Ahead is just that for the Helio Sequence: an unfortunate side trip. The album does have its moments where you can hear the band as you remember them, but most of it is buried under the weight of modern rock drudgery. Maybe they just got sick of the electro-pop after the Postal Service blew up, but whatever it is, Keep Your Eyes Ahead isn’t the answer.