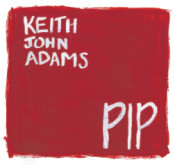 Keith John Adams is a UK artist who somehow on his second full-length solo album Pip takes the pastry shell of modern New Wave revisionism — experimental time signatures, Beatles-inspired keyboards, jagged riffs and jazzy dance hall meanderings — and floods them to bursting with a unique delicious creamy custard of marzipan-sweet melodies, crunchy yet swinging rhythms, and alternately tart and tasty lyrical imagery. It's a sound that pleasures today as much as it would have on a vintage Stiff Records release, filled with all the play and progressiveness that label exemplified (not unlike Adams' current home, the face-lickingly wonderful Happy Happy Birthday To Me).

Starting off as a member of the acoustic-based Horse Doctors back in the early 90s, later on with Zuno Men (which had a hit single on the BBC, "Stay With Me"), Adams can layer any song with splendiferous joyful textures using things like toy pianos and accordions whipped together with traditional rock gear. He happily and unabashedly sings about a friend transformed by love (the absolutely scrumptious "Torch"), very touchingly about his adorably common sense and affectionate father ("Dad") and the special relationship they share, and wanting to completely absorb a lover's mind in curious and passion-filled infatuation ("Inconsequential Thought").

The hypnotic plucking and tinkling never gets annoying, only making the hooks on the choruses that much more fetching. Imagine a Kevin Coyne without angst, but just as imaginative. There may be a couple songs here too many, and perhaps a little less jauntiness would vary the mood throughout, but that's nicking pits.

The Brit bubble-punk of Pip follows 2002's Sunshine Loft and a couple of mini-albums after Adams toured the States for three weeks in 2004. His current bass player on the road is Ant Chapman, who crisply and powerfully produced Pip in London over the past couple of years. Adams plays almost all the instruments himself on the album, but unlike some other one man band geniuses, his songs are filled with a lot of spontaneity and loose-playing, not sterile perfectionist constructiveness. And a whole lot of toy piano, too, which I can't get enough of!