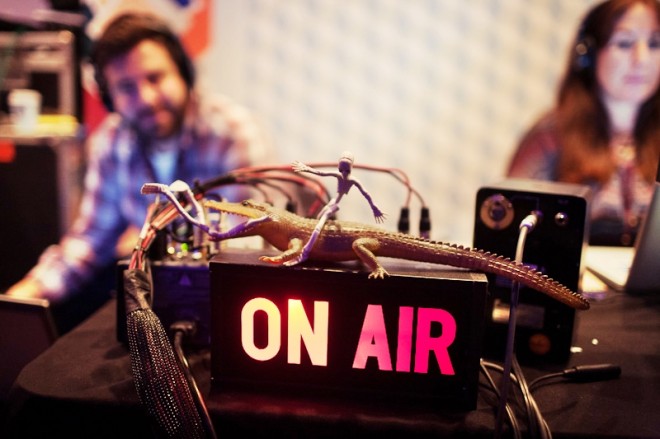 KEXP is having a party, and you’re invited! {TODAY at 6pm}

You read that right!

Our beloved KEXP is holding a pre-housewarming party at their new home — Seattle Center! — today, starting at 6pm. And you, you, and you (yep, you too! yay!) are all invited to come down and celebrate. The party is tonight from 6pm – 8pm, features music by The Cave Singers, and is free free free!

Here's a little more official word on the event:

This is the first public event at the site of KEXP’s New Home in the Northwest Rooms of Seattle Center, and the culmination of an on-air celebration of the musical history of Seattle Center. The rally kicks off KEXP’s “All In” music match, an opportunity for music lovers to double their New Home donations. From July 10 through Tuesday, August 5, all gifts to help build KEXP’s new facility will be matched with funds contributed by a pool of artists including Pearl Jam, Macklemore & Ryan Lewis, and Dave Matthews.

In its new facility, KEXP will offer public access to in-studio performances, educational opportunities for all ages, world-class tools to connect worldwide audiences to more “music that matters,” and improved hospitality for touring bands, so they sound, feel, and smell their best when performing for the KEXP community. In order to build its New Home, KEXP has launched Breaking New Ground Together: The Campaign to Build KEXP’s New Home, a $15 million capital campaign. The “All In” music match enables KEXP music lovers worldwide a way to maximize their support for the New Home and the benefits KEXP brings to music fans, artists, and the city of Seattle.

PS, on top of all this goodness, the station will be playing artists that have performed at Seattle Center throughout the years all day.

We'll be at Seattle Center today showing our support, and we hope you can join us. See you at six!

{Photo courtesy of CMJ.com. Learn more about KEXP's initiative and mission at rally.KEXP.org!}