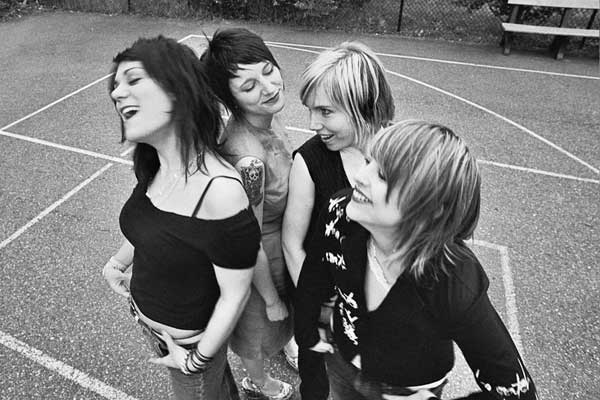 You know those bands that capture your heart and whose songs auto-trigger some of your happiest memories? The Catch is that band for many on the imaginary team.

Their story is the stuff of legend.  When banded, Carly Nicklaus, Alissa Newton, Jenny Jimenez and Amy Rockwell were a force to be reckoned with from the moment they formed The Catch. With fetching songs that blend poptastic Go-Gos charms with searing riot grrrl anthems and equally fetching charisma, it’d be really easy to be jealous of them if they each weren’t the most kind and disarming of gals. The Stranger even declared singer-guitarist Carly as “Seattle’s own Beyonce” and bassist Jenny was crowned “Sexiest Band Girl” – both titles are undeniable.

TIG first met them in 2003 and were intranced.  At each show, we always made our way up front of the stage.  We couldn’t help but be super-charged by each lyric, baseline, keyboard lick and drum riff the band threw our way. It seemed like forever before they released Get Cool, their debut (and only) album.  It was a perfect succict soundtrack for all our adventures on the town.

Their sassy and coy chants turn lipstick and heels into weapons of self-confidence and girl-power revelry.  Their infectious lines like “And if you know me, you can join us anytime / And when it’s over, we’ll step into the sunshine” make me want to turn every night into a party and stay up with my best pals making the most (FUN!!!) of our time together.

Our hearts broke nine years ago when we found out that the four ladies weren’t going to continue to play shows together every month for the rest of our lives.  How were we supposed to find the will to ever hang out past last call again?

Well, thankfully in the months and years that followed, they split off into other bands, kept in touch, met up with us at karaoke nights, and… now, on Wednesday, June 25th, THE CATCH WILL PLAY A REUNION SHOW at the Crocodile!

The fangirl scream we shouted at the top of our lungs the moment we found out could be heard from as far as Seatac. The night includes more than just our beloved Catch reuniting: Opening up the night is Tennis Pro (you. must. go. see Big in Japan, a movie starting them that recently played at SIFF) and Aqueduct is topping off the night (and hopefully debuting some new material).

It’s going to be a night for the record books.  For so many reasons… the amazing bands, the amazing friends (which means YOU have to be there)… and so we can all sing along at the top of our longs when they yell, “FIRE! FIRE FIRE!”

The big show night is fast approaching and tickets are going fast.  Go get your ticket now and let’s toast all things imaginary.

Need a refresher of just how cool The Catch is and how amazing this show is going to be?