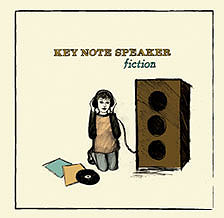 "I bet these guys throw a rockin' fun live show."

"Not that different than a lot of other local rock and roll stuff."

Fiction is a promising debut for a newbie band that's obviously confident in the music they are writing and recording. Extremely competent in its production, the songwriting and overall timbre of the record is nothing to criticize, but neither is it something to laud as "the next great Seattle band" either. At least, not yet.

The lyrics aren't particularly strong, or particularly lacking either. From "What Went Wrong": So this is what it feels like to be alone/ And I don't want to feel this anymore/ So run up to me baby, I need to know/ What went wrong?" It's a sentiment that's been used, a sentiment all over this record. The standard "you're a bitch but I love you so" group of songs by a group of musicians who listened to a lot of R.E.M and Sunny Day Real Estate growing up.

Other lyrics: From "Monday Morning": "Woke up Monday morning and I can't get out of bed/ I'm lying here just thinking about the words I should have said." From "Smile": ""Will you still be my one and only? / Will you still be the one who sees me as me?”" From "Tomorrow": "Wipe the sleepies from your eyes/ And place a kiss upon your cheek/ Well it was just another night/ Perhaps a dream within a dream."

Musically, it's rock and roll: guitars, bass, drums, distorted bar chords, and a rock singer's tenor voice. The songs roll nicely, one pop-rocker into another, and each one complements the last as they all seem to focus on essentially that same lost-love sentiment. It's a record that's been done many times before, and will undoubtedly continue to be done.

But you can't blame them. They do a good job with the archetype, and the record itself is a pleasure to listen to. If given the chance, I would gladly see them live. It would be like watching a romantic comedy on TBS — something not necessarily mind-bending, but a great way to spend a Friday night just the same. Tom Hanks and Meg Ryan are different characters then the last time, but still doing the same thing they normally do.

We all watch and (admit it) enjoy those movies, despite knowing they're not cinematic monuments. Key Note Speaker is the same way: not a monument to the history of music, but something that we all want to return to when we're in need of a fun, rock and roll record.

{NOTE: This review was originally posted with lyrical mistakes, quoted incorrectly by myself. The corrections have been made and I cannot apologize enough to Key Note Speaker and anyone who read this review with the incorrect lyrics quoted. Go see and listen to Key Note Speaker, they deserve fans singing along, undoubtedly singing along better than any critic could. Sincerely, Imaginary DC Correspondent Joe}