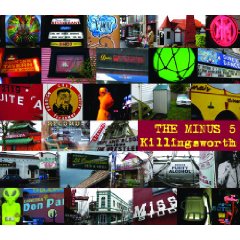 The Minus 5 are releasing Killingsworth at the same time leader Scott McCaughey is putting out Young Fresh Fellows’ I Think This Is, both on Yep Roc. McCaughey’s OG band was the YFF, one of the most high profile “college rock” bands of the 80s, their sinuous chicane garnering acclaim from Rolling Stone to scores of local zines at the time. That band included, among others, Kurt Bloch (later Fastbacks), whose guitar is the inspiration for a lot of playing that has come out of this region since then.

But there have been few songwriters Seattle-spawned as misery-guzzling and diarizing as McCaughey, whose drunk village savant rants and rave-ups against relationships, religion, the rent, and himself are close to the hearts of his purlieus peers. Upon moving to Portland, he began amassing collaborators there who have helped his newer band put out some out much of his best music ever, such as The Gun Album from a couple of years back, pulling in Wilco’s Jeff Tweedy as well. This album has on board for much of it John Moen of the Decemberists (and “a Maroon and a Dharma Bum and a Jick”), and the vocals of Colin Meloy, but also REM’s Peter Buck as usual. Special note should be made of Little Sue and the Shee Bee Gees who do a lot of backing vocals and dueting (“I Would Rather Sacrifice You” in particular for that) here in the way that female accompaniment has made later period Leonard Cohen albums less caustic on the ears.

Actually, musically, there’s not much that’s too raw or rough about The Minus 5 this time out — no clenched-balls rockers like “Aw Shit, Man” — and the fourteen acoustic-based tall tales aren’t as accusatory or grim (especially when compared with The Gun Album). Killingsworth is an area of just-about NE Portland where Scott and his motley-cum-celebrated crew created these strummy yummies out of the deep well of wit and woe, and the first four — “Dark Hand of Contagion”, “The Long Hall”, “The Disembowelers”, “The Lurking Barrister” — are “up there” (where is that?) with many of M5’s greatest songs. “Dark Hand” balances lines like “Your wedding day was so well planned, like a German occupation” with more compassionate images such as “It wasn’t the wrath of God, guess he was busy elsewhere.”