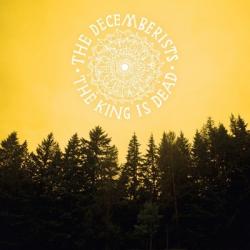 The King Is Dead

As most semi-popular music fans know, the two oldest stories in the history of the rock album as “art” is actually the same one from different ends. The grand, ornate, rococo resurrection – and the stripped down, for serious or fun reinvention. Dylan invented all this with his trilogy of amphetamine-fueled apocalypse pop in the mid-60s, and then followed it with LPs where he wore cowboy hats on the cover and tenderly rasped about throwing it all away.

As you may have heard, The Decemberists have kind of done that, too, on recent release The King Is Dead, after one or two double-LP length leviathans of noodly odysseys and noisy oracles, now coming down with some sunny, bittersweet folk-pop, but without leader Colin Meloy having to get all mashed up on a motorbike to do it.

Actually, there’s lots less psychic damage and violent imagery here than on The Crane Wife and The Hazards of Love, but I’m really guessing. I have no stakes in whether or not the band should collaborate with Americana like-minded kin like neo-depression bellwether Gillian Welch, and twangle-guitarist Peter Buck here (and don’t care a bit how many people think this sounds like an REM album; or rather, care as much about that as I did people in the 80s who thought REM albums sounded like Byrds albums from the 60s), or keep on expanding till they’re at Tusk-level.

Also, while The Crane Wife may be my favorite Decemberists album because of that gleeful dusky murder ballad about Protestant children carving up passersby and a title track which sounds like the ghost of my dead mom pining for my also dead dad, I missed out on The Hazards of Love altogether, because it was all just so damned complicated to get into (my wife says it’s great though, and I bought it for her, didn’t get it for review, which shows our household invests in The Decemberists, for what that’s worth).

The King Is Dead grows and grows on you, if you love sanded-down and souped up songs about romantic roadkill and clumsy thieves and hearing hushed rumors about the seasons changing from people with nothing else to gossip about. It has several of my most-enjoyed-songs-lately on it, such as the reasonably-assist-other’s-burdens compassionate libertarianism of “Don’t Carry It All,” the bluesy grind-grass of “Calamity Song,” and the early-evening pastoral funk of “Rox In the Box,” all wheat-field winners. But if the concept of the “second side” of an “LP” still exists, the triple treat of first single “Down By The Water,” “All Arise!” and “June Hymn” are dizzying. The middle song in particular is more than just fun, with some weary love compromises coming off as cranky affair raves, the lack of trust between singer and beloved seeming a bit (attractively) tawdry, even if the title pushes things a little too in the anthem direction.

Which is a good place to say that Meloy may have a problem writing a simple love song, but is hardly the James Joyce of indie rock write hacks like to hack write him out about hackity-hackity. And that somewhere, in the broad shouldered-solid and nestled-in-the-crook of the arm instrumental playing of The Decemberists, among the fairy tales and allegories and timeless lamentations, there is the universal connection we all crave: A tune to remember her or him by. The Decemberists deliver love songs behind a delightful veil, but don’t mistake that for a mask.