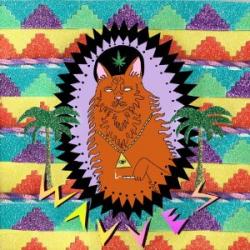 King Of The Beach

I feel kind of stupid and irresponsible for recommending an album of elaborate in-jokes based on wacky self-destruction, baiting self-deprecation, addictive isolation, passive aggressive antagonism, and mocking stubbornness. But Wavves’ “front-man” Nathan Williams has survived the taunts of too-serious careerists and time-to-quit behavior monitors, delivering an album that joyfully fuses 90s style pop punk vocals with a whole sun-drenched buffet of salty rock and bathroom disco and new wave cupboards full of cigarette-butt-stuffed sand castles. It’s a joke that makes you laugh so hard your belly seizes up as you slip on some burger wrappings and fall down on someone’s Ray Bans. But you don’t care, as Williams says, “because it doesn’t mean shit.”

There are mostly two camps of people tossed on Wavves, those who loved the homemade “chill wave” he scrapped about before on two releases, and those quite happy he’s hooked up with Jay Reatard’s guys to man-boy up the promotion of King of the Beach. I think this is a transitional record myself, even if it was labored over for months at Sweet Tea Recording in Oxford.

I mean, it does sound like it: these twelve tracks are filled with oodles of brain-boiling hooks and noisy squiggles, sounding as garage teen lycanthropic on the breaking-wave break-neck “Post Acid” (“I’m just having fun with you!” he has to shout over and over again, but he’s right, it is fun), Fol Chen-style drum machine Motorik-lite on the candy-freak scrumptious “Convertible Balloon” (gummy-colors-can’t-get-out-of-my-head!), and then flowing majestically on the guitarless-Ramones “baby’s dead” mini-movie of finale “Baby Say Goodbye.”

Lots of Phil Spector two bass drum beats to explosion through handclaps and really good “woooing” all over the top, everywhere. It’s aggressive but tender, as sparked as a nitrite-soaked bong hit with a girl hanging out with you to piss off her mother, and you end up kissing on 45th in the U District, near that really menacing painting meant to be happy two-headed flowers staring at you from the dirty wall next to the bus shelter.

Is this top level mind-crime? No, but it puts the bullies in their place without taking out a full page ad anywhere to harass them back. And the revenge might be when Williams and his boys kick out what is rumored to be an even more raging follow up. Meanwhile, King of the Beach is my favorite indie rock album this month, and that’s pretty great for August. It might end up being my favorite album for the whole summer.