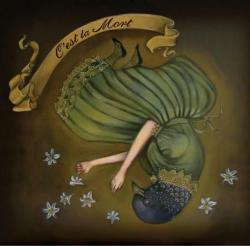 {C’est la Mort is playing Saturday, August 14th at the Comet in Seattle.}

To be concise, Empty Words Fill Lonely Spaces by Seattle’s C’est la Mort is a masterful record that has helped me realize that there are still some fine groups out there. This band has been around for some time under various incarnations, but the one that recorded this album — their debut — has honed down their sound to an immaculate result.

C’est la Mort consists of a drummer, a bassist, and two guitarists; whose delicate interplay weaves a sonic concoction full of ethereal beauty and urban angst. Their style instantly evokes the classic 4AD sound combined with a not-so-subtle adoration of The Chameleons. This said, the vocals are much the opposite and provide the listener with a unique experience: singer Kim House’s voice falls somewhere in the realm between Miki Berenyi (Lush) and Elizabeth Fraser (Cocteau Twins).

In addition to track after track of fantastic songs, Empty Words Fill Lonely Spaces actually sounds amazing. The production quality is stunning and the songs are perfectly mixed, with just the right levels in the final product. “Drown Out” starts out sounding like Pornography-era Cure, before morphing into something more reminiscent of the Pale Saints; while “Paper Ships” stands out as an epic track, blending all of these influences with layers of guitar that recall The Church circa Hologram of Baal.

C’est la Mort is the perfect local act for enthusiasts of finely layered, reverb laden gothic and/or psychedelic music. They have all the hallmarks of memorable bands, in that their music consists of excellent influential elements — while still remaining engaging and not at all contrived. This Saturday’s CD release at The Comet also features Romance and Black Nite Crash, which is pretty much bringing some of the best acts in Seattle together, on the same stage, for one show that is not to be missed.