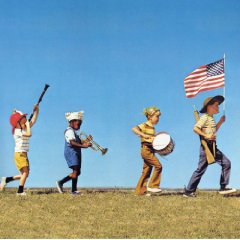 Compared to the rest of our staff and readers, I'm a novice at finding the great new bands. I've barely scratched the surface of what Seattle as a whole produces musically, and I'm always two steps behind on the new hotness. That's okay, really — You all love a lot of great bands, and I'm eager to learn from you.

Sometimes, however, I find myself in a situation where I'm the closest thing to a music nerd in the room. Conversation turns to finding new bands, and how they don't make music the way they used to. "Why doesn't MTV play videos anymore? That was great." Someone inevitably asks what everyone is listening to, and as the silence falls over the crowd I pull out my ace in the hole: Portland's The Dead Trees. I spent this past summer obsessing over their Fort Music EP, a far-too-short collection of breezy guitar pop that won over everyone I forced to listen to it. Their first full-length, King of Rosa, retains the same ingredients that keeps Fort Music in your playlist while expanding on the band's strengths.

The first few strums on opener "OK Standby" reinforce this notion. The riffs and beats are effortless, almost lazy in the way they come together to form a song. The solo after the first chorus is fuzzed to high hell and back in the mix, unwilling to try hard enough to jump to the forefront. Even Mike Cummings' singing sounds like he just woke up from a luxurious nap, possibly nursing a slight hangover, until the song hits its climax. There's nothing complicated in the band's sound, just a willingness to let the melody and groove take over.

Other songs on the album follow this esthetic while showing off the band's influences. "Loretta" is a throwback to the swagger and swing of The Beatles' "I Want You (She's So Heavy)." Meanwhile, "My Friend Joan, She Never Asks" features light piano chords that reinforce the simple acoustic strums and Cummings' insistence that "It's not your fault." "Let Me Sleep" is the sound of a lonely night of heartache and cheap whiskey, with idle guitar licks that wrap around your head like the buzz you're chasing. None of the tracks here are urgent, and yet the instrumentation tightens up and kicks into gear the moment the hook comes in.

King of Rosa is far more assured and confident than most debuts, which is why it's so easy to keep listening to. The Dead Trees put together a collection of songs that sound almost timeless, classic upon the first listen. And if they can do that on their first go, imagine what their peek will sound like.