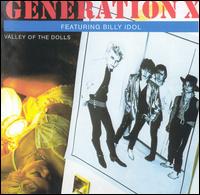 Every once in a while (well, only when I happen to listen to Generation X), I wonder what Billy Idol's doing with himself these days. I wonder if he ever gets down knowing that so many of the contemporaries of his first band, Generation X, are ensconced as punk heroes (The Damned, The Buzzcocks), are outright rock icons (The Sex Pistols) or have been pretty much canonized by the rock community (Joe Strummer). And somewhere, there's poor old Billy Idol, a living joke we last saw mocking himself in The Wedding Singer.

Overlook that slide his solo career took, and it's not like Gen X is anything to laugh at, either. "King Rocker" takes a driving tom-tom beat, tosses Tony James glammed-up punk riffs into the mix and pushes Idol to keep up. It's certainly not The Clash, or even The Buzzcocks, but Generation X's lighthearted — and, in retrospect, incredibly commercial for late-'90s — London punk should be getting at least as much respect as crap like Sham 69, right?

I know, I know, Generation X was essentially seen as kids' stuff, a lightweight take on the then-nascent punk phenomenon, and the years haven't done anything to erode that feeling. But after sitting and watching a parade of increasingly juvenile pop-punk move into the spotlight, I kind of feel a little sorry for old Billy. After all, by today's standards stuff like "King Rocker" isn't quite as fluffy as we seem to remember it.