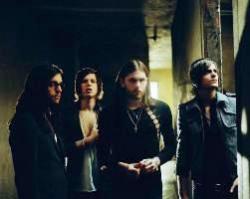 Kings Of Leon at The Moore

Imaginary readers know the prevailing imaginary opinion of this record, especially imaginary Dana’s distaste for the album and “Knocked Up” in particular, but love or hate Because of the Times, Kings of Leon's recent Seattle tour stop secured a rock n roll spot in the audience's heart.

Kings of Leon opened with “Black Thumbnail” and by the time lead singer Caleb Followill got to the inaudible chorus “Don’t leave no smell on me,” it was solidified that KOL are a rock band through and through–everything about rock music is exemplified in them. Throughout the set, Caleb showed off his Mick Jagger-esque strut about the stage. The tight pants, the boots, and the straight ahead guitars cut through the theatre and split our ears.

“Black Thumbnail” gave way to “Taper Jean Girl” (the aaaahhhh-haaa shaaaakke song) and the crowd roared with appreciation. They tore through the first five songs in twenty minutes, stopping only to introduce themselves after “Fans” with a simple “We’re Kings of Leon.” They showed their softer side as the opening chords for “Arizona” soon turned into the power ballad hooks that are the songs hallmark. After each song, or each pause, or whenever he felt like it, Caleb would toss guitar picks into the crowd, free souvenirs for all.

The show went on as the band mixed up the set list evenly amongst their three full length albums, seven from Because of the Times, six from Aha Shake Your Heartbreak, and four from Youth and Young Manhood. The YYM tracks were great, obviously polished after being played so many times over their career; "Trani" especially shown brightly, as the songs bluesy emotional feel was exemplified as Caleb wailed “like a train on ten” voice cracking with emotion.

They ended the evening with “Charmer” and I have to admit, it was pretty good live. The screaming seemed to fit in a live context, lots of energy, it was a good show closer and a solid ending to a great show.