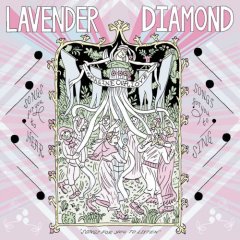 But records are not people. They are actual, tangible objects that we have a snowball’s chance of taking home from the record store. And they rarely come any prettier than Imagine Our Love.

The folksy songs on this record bring to mind lots of 70s, soft-rock, AM radio staples like Elton John, Joan Baez, and Peter, Paul and Mary. For lack of a better term (and one others have coined long before I did), Lavender Diamond could fall under the “indie easy-listening” label alongside Joanna Newsome and Dean and Britta with its focus on lush harmonies and mellow instrumentation and production.

This record was skillfully produced by Thom Monahan, who has worked with artists as diverse as Devandra Banhart, Dinosaur Jr., Silver Jews, Jim and Jennie and the Pinetops, and Apples in Stereo. The production brings the piano and string instruments to life and adds an important layer on top of the guitars and drums. Every note is arranged perfectly, just as good poetry arranges every syllable masterfully. Yet, the most important instrument Lavender Diamond uses is singer Becky Stark’s classically-trained voice.

Her voice (and by proxy, songwriting) is usually soft and so-delicate-its-almost-fragile, but is also melancholic, earnest, and in the case of “Here Comes One,” childlike. The songs lyrically are simplistic but earnest and seemingly sincere. The songs that work best are the most upbeat – “Here Comes One” and “Open Your Heart” – because they draw out the orchestra more with a much fuller, singalong sound.

Having said all of that, and this album truly is a thing of beauty, I cannot envision a time when I would reach for it over something poppier and messier (although that goes towards my own biases more than anything else). This record is like a rare doll collection: you leave it on the shelf and in the original packaging for all to admire, but will lose its luster quickly if it's played with too much.