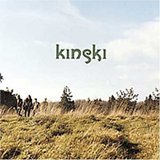 Kinski's latest release, Alpine Static is mostly a heavy, dark, evil instrumental record — perfect for playing my bass loud and deep to when the neighbor upstairs is stomping around. It ends on placid plucking, most often found in spaghetti western scenes.

It's the kind of rock and roll record that was meant to be made — when dudes first went out into their basements or tool-sheds or two-car enclosed patios and played with stringed buzzing electronic equipment (guitars and basses) and someone willing to play drums beneath the din. They stop for awhile, power-chug some beers, light some matches to the threads at the bottom of their jean legs, peel those moist labels off and set the rolled-remains on top of the hot amps, and then start shaking the walls again, having sound-sex with each other through garage-art. Sometimes, like the pretty playing through "All Your Kids Have Turned To Static," or the lovely keyboard noise when "Passed out On Your Lawn" kicks back in for an epilogue. It's like boys kissing gently during a "rough house."

Hold on! There's a chick in the band! And she plays the BASS, which seems to be what most of the music is built around — in spite of Chris Martin and Matthew Reid-Schwartz's oscillating guitar textures and (especially in the mid-section of "The Snowy parts Of Scandinavia") dump truck squall (before that song turns into a Steve Reich as a guitar god stroll on Einstein's beach, sand pounded down by near Klaus Schulze-level drummer Barrett Wilke). The bassist's name is Lucy Atkinson and her very existence shoots Andy Warhol again — or at least crushes his soft pale bones beneath her construction boot-heels.

This is Kinski's sixth record if you're counting their split CD EP with Acid Mothers Temple (who they've toured with, as they have with Comets on Fire, Oneida, and what must have been an amazing line-up pairing, Mission of Burma). You can hear these stylings in more well known groups such as Bardo Pond, but come on. If man is six, Kinski is man alive, man making grace before seven, man creating to exist and existing to create. Faust and Freud haunt this thing like a weekend kept in a crate on hallucinogens at a cops' warehouse party in Prague.

More things like Mellotron and harmonium and they could have another "Who Will Save The World?" though they're still in their "Thank Christ For The Bomb" phase really — probably on purpose. But citing "the T-man" (Tony McPhee) of the Groundhogs is a good way to get in my good graces, even if sometimes your sound is closer to "Black Train" off of Montrose's "Warner Bros. Presents Montrose" album. Okay, as a smooth mix with Sabbath's "Into The Void." I bet they own "Paper Money" though even if it doesn't show up in the bio.

In Finland they'd be Wigwam; in France they'd be either Zoo or Zao; in Italy, possibly Area. But Seattle has them — and if Timothy Leary were alive he'd be howling lyrics beneath the drones like on "Seven Up." But they oddly keep everything voiceless — making it more sacred (or maybe they've just ingested so much street acid they can't get a word out whilst they're playing). Whatever. It works.