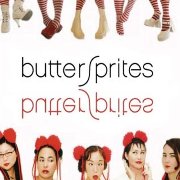 Yes, they cover Altered Images' adorable "Happy Birthday" and make it even more enchanting. Just remember that Claire Grogan's cuddly band was assisted by Siouxsie and the Banshees' Severin and John Peel, and that The Buttersprites make the song their own. Also notice that the Buttersprites also cover Iggy Pop's delicious "Dog Food" here too. This is the whipped-icing demonic dialect that is Buttersprites.

As great as the covers are on their thirteen-track debut, it's the originals that really sparkle, showing just how intuitive all five of the women are at working together to create a richly textured, yet still visceral sound. Elizabeth Jameson envisioned the band and adds its sweet riffs; Lunarre Omura plays bass for the lounge-core band Lushy and her on-the-one playing anchors everything; Julie Grant and Jen Gay lock play tightly with them on keys and drums, respectively. Lead vocals are by Haruko Nishimura of the Young Composers Collective-now-Degenerate Art Ensemble, and her flexibility in singing, noise-making, vocal acting, and wicked-wonderful personae shifting make the Butter sprites a compelling listen, no matter what styles they try.

At first, it may seem the band is merely pop-punking it behind Nishimura's expressive sing-a-longs and taunts and spoken passages turning into shrieks, but then Omura shows her ability to funk it up a la Au Pairs on "Fever" (and its extended dub), Grant and Jameson try various gauzy effects for (could easily be a huge international hit) "Kokeshi Doll" and "Kimono Kitty," which seem near-psychedelic. After a few listens, as sturdy as the rhythms are, the band has very craftily added contrasting textures around their lead vocalist's own amazing multi-level approach.

Major highlights: The swirling, strumming pop of opener "Panic Attack," with its lovely descending vocal that erupts in giddy cackles, seems like Lene Lovich after some good, relaxing drugs. The delicious following track, "Fresh Mochi" (I'm heading to Uwajamiya now for some!) has gentle but abrupt tempo breaks, as if the treat in the title was an ice cream confection with a little mustard smeared on top. "Yellow Peril" is a wonderful mocking song about (I'm guessing) the kind of people who would find the Buttersprites both irresistible and menacing. Musically, those fetishists would be right on both counts.

Jameson herself admits she started the band in the style of the legendary Shonen Knife (who recorded the best version of "Top Of the World" EVER), but only two or three of the songs are in that style. The lyrics are mostly in Japanese, but if you're into post-punk dance artists like Nina Hagen already, you're not coming to the music with expectations of anything other than wanting to be freaked anyways. Buttersprites worked with Lushy member Andrew Sodt in the studio on Buttersprites, after some priming with living-in-Seattle now ex-Specials founder Lynval Golding(!). Along came KEXP and Purefire's Johnny Horn to assist, giving this, their first album, its clarity and tasteful balance throughout. Tasteful? No, TASTY!