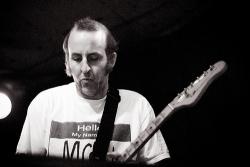 Wolves in the Throne Room. What imagery a name like that brings. Let's see: a throne room is a regal place of solitude where royalty sit around. Wolves, being natural predators, can create havoc and chaos wherever they feel. They also have very sharp fangs, prominently displaying them whenever they need to threaten. In terms of the band with that moniker, let's dissect. Wolves in the Throne Room came in to the Crocodile with their jarring metal [fangs and claws] and wreaked havoc on our heads and bodies [throne rooms] when they opened for Kinski. That's all I'm going to say about that band. 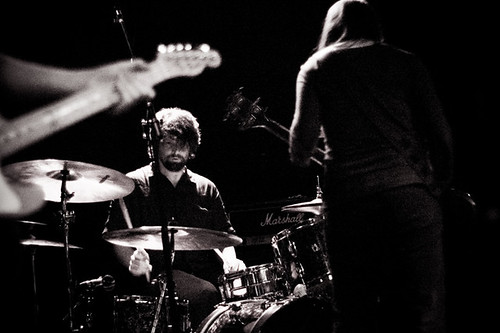 Between Wolves and Kinski, the audience made a complete 180. For the openers, black clad metalheads filled the showroom. For the prog-rock headliners, normal looking middle-aged people gathered. It was a rather eerie change. Taking the stage, Kinski filled the air with a cacophony. Coming together, they started to play catchy guitar hooks and drumming you could keep up with. Suddenly they'd punch you in the face with heavy noise, calculated not messy. This toss-up went on for the first few songs. Just as you thought you had their song down and were starting to dance, they'd change everything completely. 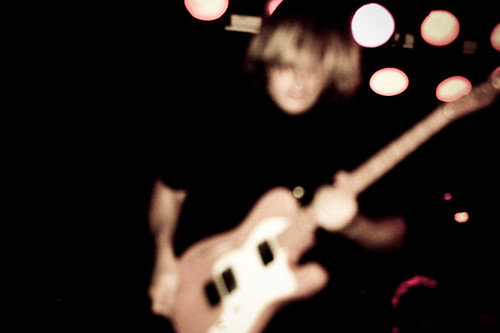 Music critics like to prod each other for describing a band as "experimental," but what else would encompass what Kinski does? They undoubtedly hypothesize and test an unfathomable amount in order to hone the skills they possess. They use techniques never or barely seen in any other band.

Particularly in notice is the guitar work of Chris Martin. At one point he was squeezing beeps and bloops out of his guitar only previously made by an old computer. You know the cliche about guitarists making love to their guitars? The guitarists of Kinski don't make love to their guitars — they full-on fuck them. Watching Matthew Reid-Schwartz give his guitar all he has, well enough with the metaphor. What he does make love to is his synthesizer. He romanced the hell out of the thing, and it responded back with sounds that make all other keyboardists and their Korgs look like first time lovers. 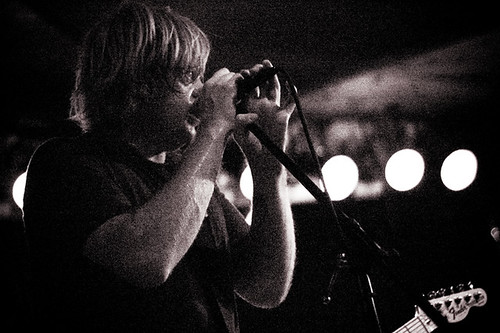 Between the boys was bassist Lucy Atkinson, who commanded the stage all her own. If female bassists are one of my favorite type of musicians, watching Atkinson was like witnessing the second coming of Christ. She doesn't just play the bass, it seems to become an extension of herself. Using resin bows to play guitars isn't anything new but her style of the technique makes it seem as if she's playing an entirely different instrument. If there was a PhD in bass playing, she wouldn't just have one, she'd be teaching the courses. The chemistry between Atkinson and her Kinski counterparts was playful and sparking.

As this show was their kickoff for their new Sub Pop release, Down Below It's Chaos, they threw in a couple of the new tracks. One incorporated Martin on vocals and was a bit more mainstream than their previous titles. if the fans are any indication of what Kinski they like best, highly experimental or more subdued, the former definitely drew more cheers from the audience. As white noise build-ups introduced the next song, the crowd could hardly contain themselves, yelling "Do it! Do it!" at Atkinson as she drew rumbles from her bass. At one point drummer Barrett Wilke was away from his kit and pounding on a gong, jumping around the back of the stage. 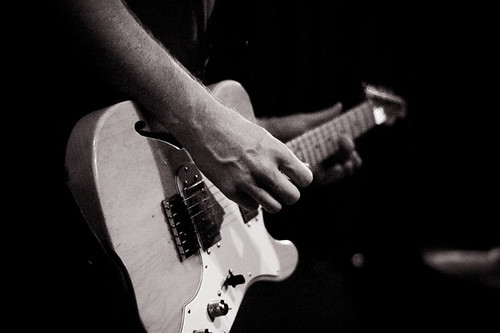 With albums by Sunn and Earth on his resume, producer Randall Dunn is a great fit for Kinski's third release. My bones were still vibrating from their power well after they exited the stage. How could they leave us without an encore? Within moments from their leave, the set-up for one more song was taking place. Atkinson took the stage alone, looking statuesque upon the stage among all the instruments. She drew an enormous bassline out as the foundation, while Reid-Schwartz followed next, making that aforementioned synthesizer show it's full ability. Martin and then Wilke followed, adding to the layered enormity. Pedals were pushed and loops were produced. Beer cans were tipped over. It was an overwhelming song that lasted well over 10 minutes.

After almost a decade, Kinski are not just four musicians creating music together — they're a well-oiled machine, a successful laboratory producing extraordinary results with their experimentation.