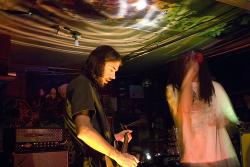 You know the phenomenon where you attend a show to watch one band and come away with a new favorite from another band on the bill? This is how I discovered the local band Red Rapture. A few months ago I ventured out to the Nectar Lounge to see my friend's band Ubik play. Afterwards, we were unsure who the other bands were and being a work night, debated whether we should stay or not. When the next band started to set up, I noticed they were a rock band with a rapper. Great, a crappy rap metal band a la Linkin Park, I thought. Boy was I wrong.

The best way to describe Red Rapture is a post-rock band with a highly skilled MC over top. This may sound like an impossible combination, but somehow they pull it off. Guitarist Jeremy also programs beats and electronic additions as the foundation for their songs. On top of this foundation are his guitar parts, which include distorted wails to soaring solos to simple pretty moments. As I said, post-rock — lots of rising and falling. Next are low, smooth bass lines, a cohesive middleman between the electronics and guitar. Jeremy cites Bjork as an influence on their web page, and as the main songwriter this is very apparent. Finally, over top like the cherry on a sundae are Andre's fluid spitfire raps. Even as a rock group, his technique should get real recognition in the growing Seattle hip-hop scene. 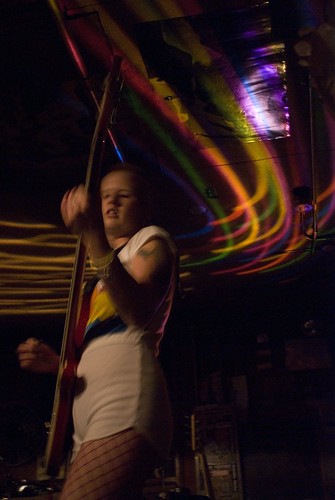 Live shows from them are consistently entertaining, and the Blue Moon show on Friday was no exception. Each band member played the same song, but visually display edtheir own interpretation. Jeremy was in his own element, thrashing about the area of the stage he took up when not adjusting the electronic equipment. His longish brunette hair flailed around wildly as he rocked back and forth. Andre commanded the stage like any good MC should, a curtain of dreadlocks in front of his face from time to time. His stance and hand motions were extremely confident as a reflection of the belief in the words he spits. Bassist Katie was entirely the antithesis to the boys rocking out, waving her arms or entire body in motion with the sweeping undertones of the songs.

The Blue Moon show was announced as her last night with the band, and Iceage Cobra's ex-bassist took the stage for the last song in a show of his taking her spot. Their last song in a farewell to her was a cover of T. Rex's "Children of the Revolution," with her taking the vocals.

As I had discovered Red Rapture initially entirely by chance, it was rather fitting then that at a show I came to see them I would discover another great band: Hopscotch Boys.

As with Red Rapture I had an initial reaction, which for them was, "Oh my god, a country band?" (an assumption based on their name). Well, as the saying goes about how assume is spelled, I was again proven wrong. 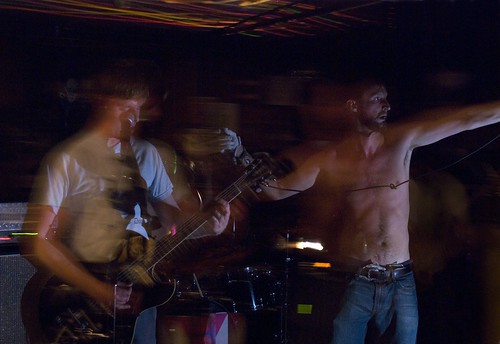 Hopscotch Boys are anything but country. In fact, they sound like Modest Mouse's angry cousin who's ready to beat some ass, with a very strong feeling of pent-up enraged desperation in their music. When singer Blowdog aka David joked he was a suburban kid and we all know suburban kids are trying to fight against… something, that feeling in their music made perfect sense. It also deepened the Modest Mouse comparison.

As a suburban kid myself, this statement and their music COMPLETELY made sense, whether David was joking or not. Their drummer, whose real name I didn't catch but whose stage name is Hickory Pete, looked like your normal friendly nerd (no offense to him). However, this analysis was quickly shattered when I looked down and realized he was only wearing his bright red boxers. Next person I looked at was their keyboardist, whose name I also didn't catch but is listed as Douchebag (his keyboard was stickered with this moniker as well). His keys parts were rather poppy and he played with a rather odd detachment to the rest of what was going on through their set.

What was going on in the rest of their set? David's caustic stage show and singing was what took this band from any ol' rock band with a keyboardist into an entirely different realm, venturing into the area of scary. Shirtless and topped off with a little kid's costume hat, he warned that the can lights should be removed from the stage edge. Two seconds later as the songs kicked off, he really kicked off — the can lights, the vocal monitor, beers. The hat flew away after only two songs. He was in people's faces with the mic, throwing himself against the ring of awestruck crowd members like they were a rubber band. At one point he was up on the chair our photographer Rustee Pace was standing on, grinding against her and yelling the lyrics within inches of her camera. 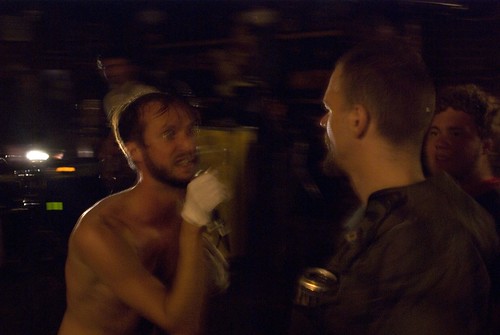 He was slightly terrifying really, and I walked up to him afterwards and said so. I really enjoy singers who can completely let loose on stage and get in touch with their inner wild animal, but I really like when such singers aren't assholes off the stage. Turns out he was just that type of singer, smiling kind of humbly when I told him how amazing I thought his show was. "You reached a level of crazy eye I've only previously seen in homeless people," I gushed. Luckily he received that as the compliment I wanted him to.

Everything was entertaining and fine with Hopscotch Boys' set, except for one asshole who actually wasn't pretending to be scary. Halfway through their set, a flanneled stranger came up to the front of the audience and began egging David on as if he wanted to really fight. David, on the other hand, spun the guy's action to take his own stage show to a higher level. But when the guy looked like he was really about to become physical with the spry singer, the air became tense. In fact, David told me afterward that the guy had flashed a knife at him before walking away. Their guitarist also told me he had his singer's back though, and would have easily sacrificed his guitar to the thug's head if anything were to have manifested. Fortunately nothing did and they came away with at least a new fan.

Oh, and who did I intend to come out and see that night? The Whore Moans, but after seeing the first two openers I felt my night was complete and left before I saw the brash punk Seattle band.