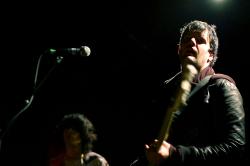 Klaxons are a relatively young band, despite their many accolades (including the Mercury Prize and headlining NME Indie Rave tour last year). And they’ve already been to Seattle three times in just shy of a half-year — they even commented at last night’s show that they’ve been here more often than their UK homeland in 2007.

It seems their incessant touring has paid off, as the set was tight and relentless, the band blasting through their setlist one song right after the next without much in between – presumably to keep the party alive. 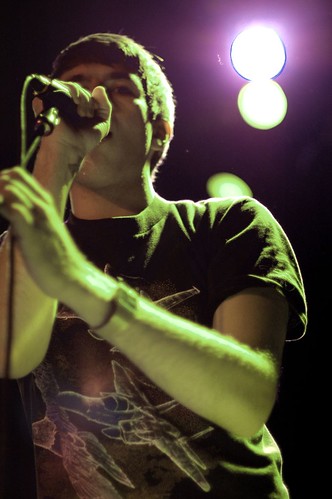 The crowd was small (I’d estimated 200-250 max; only one of the Showbox’s bars was open with nary a line to get a drink, and the all-ages main floor was scant of half-full). But, my, were those 500-some feet excitable. Throughout Klaxons set (and Mystery Jets’ before them), the mob at the front of the stage danced the evening away as though it were Manchester in 1988. And as the energy mounted through the apex of Klaxons’ acidic set, the crowd’s ferocity rose as well: jumping, arms raised, pounding their arts uniformly to the beat.

My guy and I had a bet going in to the show as to whether Klaxons would sing the falsetto-laden anthem off single “Golden Skans” or if a keyboard loop would fill the need. I won that bet when drummer Steffan Halperin impressively carried the tune right through to the end. Other highlights were the frenetic “Atlantis to Interzone” and “Two Receivers.”

Going into the show, I wondered aloud why Klaxons had to hit Seattle on Sunday night. It’s just never easy to rally the next day. But the after-effects of this show carried into my work week as I hummed the tracks, still a little restless to dance. And then it dawned on me: Like the band’s clear influence, I was ready to start the week with a little extra spring in my step: Happy Monday.