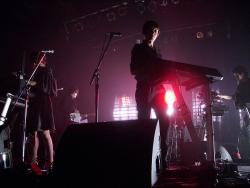 Ladytron at the Showbox Sodo

The first time I had seen Ladytron play, about midway through their set a friend whispered to me, “you realize there isn’t any laptop bullshit up there, right?” What he meant was that even though the band makes electronic music, they don’t use any samples and create everything live on stage.

Live, Ladytron is a pretty great band with a fully realized sound. It is electronic dance pop, with emotionally distant harmonies on top of a 4/4 beat. They have two female singers: Mira Aroyo and Helen Marnie. On their albums, they are always consistent, somewhere between very good and great. Although it’s not their best album (Light and Magic probably is), I’m very fond of Ladytron’s latest, Velocifero.

Last Saturday night, Ladytron came to town to play a sold out show at Showbox Sodo, coming into town with the buzz-ish openers The Crocodiles and co-headlining this tour with fellow synth-pop travelers, Omaha’s The Faint. Fortunately or unfortunately, it was The Faint’s turn to headline this show.

Ladytron came on stage promptly at 9:30 and quickly worked their way through side A of Velocifero, opening with “Black Cat”. Eventually, five of their first eight songs were from the first half of Velocifero. Yet, Ladytron’s set spanned their entire career, hitting songs from 604, Light and Magic and Witching Hour (their three previous albums, from 2001, 2002 and 2005, respectively).

At times, Aroyo or Marnie’s harmonies (Marnie appeared to have sang more songs than Aroyo did) were muddled in the Showbox Sodo acoustics, but overall they sounded pretty great, altogether. Ladytron is a professional band who puts on a tight, focused show that got a good portion of the huge crowd at Showbox Sodo dancing. While looking around online, I noticed there is very little variation on their setlists throughout this tour.

One of the members of Ladytron, Reuben Wu, told the great music writer Ned Raggett two weeks ago that the band wasn’t comfortable being labeled as “goth”, which is probably true, but I’ll just say that a lot of the Ladytron fans were dressed completely in black.

The crowd responded most favorably to their hit from Light and Magic, “Seventeen”, but my favorite moment in the set came early, when they played “Runaway”, which was my favorite song from Velocifero, yes, but it was the only song where the bass reverberated throughout the room and you could feel the song’s basslines throughout your body. Or at least you could if you stood close enough to the stage.

Ladytron’s set lasted a little over an hour and included one song for an encore. They sounded great and got the large crowd to move. When I was thinking of the show, I almost felt disappointed. It wasn’t as though the band didn’t play any song I was dying to hear live but that I expected a great show and got one. It was more contentment than disappointment, I surmised. Or maybe it was because I saw My Bloody Valentine earlier in the week for the first time and that show raised the bar exponentially for what a live show could be.

After Ladytron, I was trying to decide whether to stick around for The Faint, whose turn it was to play headliners. I’ve found their recent output disappointing but they’ve also had some pretty great synth pop songs, too – those were just earlier in this decade. After dealing with an impossibly slow line to get into the bar and an even slower one at the bar and a wait that was beginning to exceed 45 minutes for The Faint to come out, I surmised that my journalistic obligations were met and I headed home. I thought Ladytron was the better band on the bill and they should have been headlining the night. I decided to pretend they actually were.