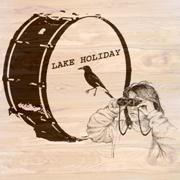 The Curse of Sunshine

Sometimes a little bit of mediocrity now and then is a good thing. It serves to keep things temperate, and it makes for a pleasant, albeit slightly bland, experience. Lake Holiday's The Curse of Sunshine is a six-song kiddie roller coaster ride. Enjoyable though it may be, it lacks the exhilaration of stomach-turning drops and dizzying loops, which can be taken subjectively as either a positive or negative attribute (or, perhaps more appropriately, as a stolidly neutral attribute).

There are several factors which contribute to the passive ambiance of this EP. Most evident are the understated baritone vocals of Bradley Davis. Davis treats all notes of his modest register with an unaffected placidity, and while his lyrics flow from subjects of passion to despair, his voice remains that of a detached narrator. It's relaxing, somewhat comparable to a "rockabye baby" sort of lullaby which is at once melodically soothing and lyrically unsettling.

The music is diverse between the tracks, but it lacks much variation within each of the individual songs. Generally, they tend to be constructed in simple verse-chorus-verse-chorus formulae with an occasional solo or bridge thrown in somewhat arbitrarily, and they don't seem to stray too far from their own conventions. By the time the first refrain reaches it end, the remainder can usually be predicted fairly accurately, which causes the music to retreat almost to the point of background noise at certain points. The saving grace which uplifts these songs from monotony is the brilliant sense of nuance; a flutter of guitar here, a stroke of the keyboards there, or a unique line of interplay between instruments in an unexpected spot.

Lake Holiday already exhibits all of the important pieces of good songwriting and dynamic musicianship, so as the band progresses they should consider experimenting with different ways of shaping and assembling those pieces. By bending their own rules and standards in regards to song structures, continuity, and mood, they might discover new methods of furthering the diversification of their sound.

The Curse of Sunshine is one giant yawn. Not a yawn of ennui, but a deep and satisfying yawn which pops the ears and waters the eyes. Lake Holiday's glass is half full this time around. However, it never hurts to ask for a refill.