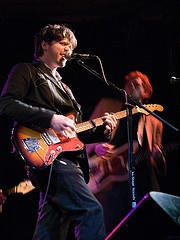 This morning, I woke up for the third morning in a row, dreaming that I had a cobra sticking halfway out my laptop, thrashing about and trying to bite me. I wasn't sure what to do, because I couldn't use my computer (for fear of getting bitten), and wasn't sure how to call animal control and explain that I had a half-a-snake to remove — but if they damaged my laptop, I'd have to kill them.

Ten second psych analysis: I think I've been spending too much time online.

That said, a delicious cup of tea and a slice of homemade chocolate cake and all is well and good this morning. Prophetic indeed, as I'm about to tell you about one of the strangest and most distinctive shows I've seen in ages, brought to me (and um, the rest of the audience at the Crocodile) by a brand new local Seattle band called Bad Dream, Good Breakfast.

{Best. Band. Name. Ever. How could I not check them out?}

And these folks are super music geeks, in the best of ways. Band members studied music at the New England Conservatory of Music, Berklee School of Music, University of Washington, and when they all crowded onto the Croc's normally-ample-sized (but clearly not in the case) stage, there were sheet music stands aplenty. It was like the school orchestra and the marching band and the indie-rockers all joined hands at recess and decided to work together toward a common musical goal.

Sometimes it's unclear exactly what that goal is. At times, especially during the quieter moment of their songs, it wasn't evident why all those folks are needed onstage. Close your eyes, and BDGB start sounding like a somewhat theatrical rendition of most Indie Pop Soft Rock Influenced Bands Du Jour. But at other moments, like when their songs crescendoed, and they really made use of all that incredible instrumentation, that's when Bad Dream emerged as something pretty spectacular. It's truly lovely to hear indie pop sensibilities made more robust with a full string section, and those women really knew how to open up their classical instruments in non-traditional ways.

It was also clearly evident how much each of the band members enjoying playing with the band. They looked pretty elated to be on-stage, and no wonder — how often do true music geeks have the chance to truly rock out with their equals? Also, it doesn't hurt that the band members all appear to be 1) very young 2) very earnest and 3) very attractive.

Bad Dream is definitely still a new band, and one gets the sense that they're still fleshing out where their sound will head. It's exciting to hear them at such a fluid state, and it's thrilling to know such a young band are taking such big chances.

Perhaps igLiz will live to see the day when "Seattle indie rock: The MUSICAL!" debuts at the Croc, and BDGB could score the entire thing.

Oh YES!!!! And Sean Nelson could play the lead role of the forlorn and loveless Cha Cha hipster, once they tear down his favorite bar for condos….

Yes! And Carrie Akre of Goodness, Ryann Donnelley of Schoolyard Heroes, and Lesli Wood of Ms. Led could play the roles of the three imaginary girls going to shows…. right? (Hey, I like to aim high!)

And they could all eat Puffins for breakfast!

Yes!! Everyone loves Puffins!! I can't even keep the peanut butter Puffins in my house. If I buy a box, they are gone in like, five seconds. And the roof of my mouth is hacked to bits. So, I choose not to partake in that particular good breakfast. Uh, yeah… anyhoo, back to the rock show!

Also of note, and speaking of the aforementioned Akre, I managed to catch openers Cantona, a band I mostly know from running into lead singer Leslie all over town but who I've never seen live. Leslie is sporting the sassiest Cruella Deville hairstyle I've seen since the Disney animation, and I might add, she's hot enough to pull it off. Zow.

Cantona performs prosaic indie-rock that at its best moments, resembles my first favorite local band in Seattle, Goodness (RIP), mostly thanks to the powerful vocals of front-woman/hair fashionista Leslie Beattie. But even as I type that description, I realize that I've described at least a zillion other female-fronted bands in Seattle as sounding a bit like Carrie Akre of Goodness.

It's like when you describe all your boyfriends (or girlfriends) in terms relative to your first one who you never got over. The metaphor is pretty close to home, as Goodness was my first love when I moved to Seattle 10 years ago. It's hard to get over your first good breakfast… I mean, your first love. Or first musical love. Or Cantona.

Oh! And before I sign off, I should mention that members of Bad Dream, Good Breakfast have another project called M. Bison, who stepped in last minute to headline this show when a member of the third band (Marble Fawn) came down with pneumonia (eep!). I didn't stay for M. Bison's set (orchestral indie-pop can wear you out!), but I did have a listen to their MySpace page. They have a less overwhelming overall sound that Bad Dream, playing lightweight, delightful indie power-pop. Tres cute! They have a show on March 20th at Chop Suey and I would definitely recommend checking 'em out.