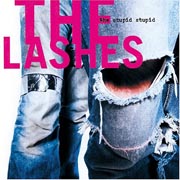 The first time I ever saw The Lashes was last summer, when they played Graceland with The Pattern. It was a Thursday night, and only a large handful of people were there to see either band (for some reason the Bay Area's now defunct answer to The Hives didn't get a very warm reception in Seattle).

The Lashes opened this show, which I was going to see on the recommendation of a friend who was touring with the headliners. I grabbed my oldest childhood girlfriend and we were off to launch opening night of our self-dubbed 'party like a rockstar weekend' (we saw Blur at the Showbox the next day, which was magical). And who knew at the time that our search for raucous parties and loud music would be so closely aligned to the behavior of our soon to be new favorite local band, The Lashes.

After prefunking at the Seattle Vespa store's grand opening, and grabbing yet more drinks at another bar down the street, we were off to the show… and yes, a little sloshy by the time we arrived at G-land, both from the late-June rain and a few too many g & t's. The Lashes were nearing the end of their set, and my eyes were a little blurry. But despite the intoxication, this imaginary reviewer's music radar was definitely beeping loudly as we watched the last few blistering songs — including a Cure cover — by The Lashes.

We were in love. In fact from that moment on, every time my cohort and I spotted one of The Lashes around town we'd IM each other and drool over their cuteness.

That night was momentous not just for us (falling for a new crush is so fun) but also for the band. According to a story in The Stranger, The Lashes specifically got on the docket as openers of that Pattern show, despite that they'd been offered a cash-positive headlining gig for the same evening. See, The Pattern (RIP) was fronted by Christopher Appelgren, who also happens to preside over a little record company called Lookout! — maybe you've heard of it? On that fateful night, not long after The Lashes' set concluded, Appelgren approached the lads about possibly signing to his label, which of course they did.

The result is The Stupid Stupid EP, the debut release by our local darlings. It's only four songs long, but it's packed full of punch and sizzling with excitement. Lead singer and all-around-hooligan Ben Lashes sings with a melodic howl atop the two-guitar-and-a-keyboard-driven jolting numbers. Joined by bandmates Eric Lashes (guitar), Nate Lashes (bass), Scotty Lashes (guitar), Mike Lashes (drums) and Jacob Lashes (keyboards) (they all took the same last name. How adorably Ramones of them), the six-piece churn out swift and smart, New-Wave-tinged pop-punk tunes and clock in their debut disc in just over 12 minutes. Their sound is a little familiar, predictable even, but they do well with it and pull out all stops at live shows. Plus, Ben's conversational lyrics feel real and are delightful. "It's been 21 nights, drinking at the bar alone. And with my stuff out of your place it's the only place that feels like home" (from "ex-mas (young in love"). Oh, Ben: Can I hug you?

Two of the four tracks on "The Stupid Stupid" are penned for local weekly columnists… never mind that neither of them no longer run their columns for which the songs are named. The first track, the keyboard-driven "Death by Mixtape," is a tribute to the seemingly meth-driven (oops! Did I say that?) column by the same name that used to grace the pages of The Seattle Weekly. The closing track, "It's Your Party," is an ode to The Stranger's former music writer and cool-scene queen bee, Kathleen Wilson. Both songs are scorchers, though the guitar solo and sweet-on-you lyrics of "It's Your Party" screams for radio attention even more than the selected single, "Mixtape." Now, boys, TIG wants to know when our props are coming. You know you want to send some sweet ear candy our way! (Shameless plug? Perhaps, but I doubt the Lashes will take issue with self-plugs.)

For all the self-created hype and press The Lashes got before their album was even recorded, this is a fine release and a great start. And as with any good crush, we want more!

PS: Their website is about to become a dot com… they are apparently victims of success. Soon you'll be able to find them at this site.