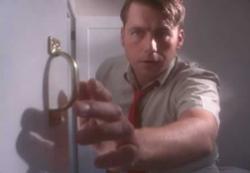 The first thing you should know about Customer 152 is that it's homegrown. Filmmaker Jonathan Holbrook is from Lake Stevens, and his digital microbudget movie was shot in Everett, Burlington, Marysville, and Conway. I hear you going "Huh?", and I have no idea where most of these places are either. But we should support localish endeavors, right?

Well, that's tricky, because films produced in these parts can elicit results ranging from Singles (good) to Hedda Gabler (ghastly). Holbrook's nestles itself somewhere between those examples, and the morning after watching the Customer 152 screener I felt like I'd just survived a bender at the Cha Cha. I think a certain glory should be given to a project that takes lemons and tries to make a Tom Collins; such a beverage is a perfect accessory for watching this movie.

You'll have a chance October 9 at 7:30p at the Rendezvous Jewelbox; this'll be the Seattle premiere, hot on the heels of a big world-debut in Everett last month. A four-city tour with the New York Independent Film and Video Festival will follow.

The story concerns Terrence Mackleby (Josh van Dijk), an annoying man who seeks salvation from his financial problems by filing for bankruptcy. Soon an offer for a mysterious black credit card arrives in the mail, and Terrence finds himself in even more trouble when he applies without understanding the creditor's terms. He maxes the card, some tall otherworldly men in suits start hanging out in the front yard, and it's just not good for Terrence.

The film and its maker definitely have potential. Aside from the Lesson About Responsibility (which may account for occasional similarities to the Christian morality films I was forced to watch as a kid), there's some cool David Lynchy PNW weirdness to be had, with out-of-nowhere bit characters and foreboding long shots. I felt splashes of The Prisoner and The Outer Limits, too; with an hour cut (and someone like Adrian Zmed in the lead) the flick could've made for a decent-enough syndicated episode of an updated Rod Serling's Night Gallery.

Does that give you an idea of what we have here? Good. Now I will relay what a good friend of mine once said of day-old sushi: "Some folks live for it. Others suffer gastrointestinal problems." This is how I feel about Customer 152.