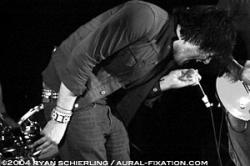 The Lashes, DEK, and Agent Orange

June 22's Graceland bill was a fascinating mix of all things punk.

The five-band-bill was definitively punk: loud, fast and adrenaline-pumping. But missing was much confluence among the bands, each at a seemingly different point in their careers as punk-rockers.

In terms of the evening's line-up continuity, the Lashes (armed with a much-deserved Lookout Records deal) were the only slightly odd-fit to the devout punk rockers in the audience. For most in attendance, their melodic, Stone Roses-inspired songs were an added bonus to a hefty punk bill. But for those skate-core, hard-core, all-you-can-eat punkers in attendance, the Lashes' willingness to banter with the audience between songs was a bit of a bore.

"Shut the fuck up!" yelled one such fan.

The lead singer Ben Lashes wasn't having any of it.

"Hey, fuck you man!" he yelled back. "Sometimes we like to play with our instruments tuned. So fuck you punk rocker!"

Amidst applause, that was the last anyone heard from the foul-mouthed Lashes-hater.

{Ed note: I think the best part was when Ben challenged the heckler with, "Why don't you come up here and tell me to shut the fuck up! I shop at Hot Topic too!" He then lifted his shirt so everyone could see his stylish studded belt. That Ben, so adorably feisty. ~igLiz}

Amazingly, not much past 9 p.m., DEK was gracing the Graceland stage and ecstatically celebrating the release of their first album, "Boner." The band (all between ages 15 and 17) paraded around the stage with teeny-bopping attractiveness and dirty-rotten-fun-as-all-get-out-punk-rock.

DEK's harshest critics (so says the Seattle PI article) are those hard-core punkers who say good punk only comes from the hardened streets, and not soccer mom suburbia. And yes, DEK (which stands for "Don't Even Know") has entitled their first effort Boner. But who didn't think the word "boner" was hilarious when they were 15?

That's what made the show unique. The experience of seeing DEK was seeing pure, unaffected-by-society suburban punk. Their songs are fast, tight compositions and they've certainly passed punk 101 with much potential to boot.

On the opposite end of the spectrum was the headliners of the bill, Agent Orange, who sported their first hit (in 1979 I believe) when members of DEK weren't even mere thoughts in the minds of their parents.

Agent Orange is classic three-piece skate punk — fast, furious bass, drums and guitar and nearly undecipherable lyrics. Everything they do is on speed, including two two-minute or less covers of "Secret Agent Man" and "Surf¹s Up." AO sift through a vast catalogue — 32 songs in all — in under 90 minutes.

Their band offered what those hard-core punkers had been screaming for hours — blood-pumping, in-your face, unstoppable skater rock that was turned up a further notch. In the five bands that perform on the night, they were the only ones that got a half-decent mosh pit going, showing the loyalty to the band's skate-punk mentality.

The band looked to be having a great time on stage and they proved their founding father status is justly earned.

The evening proved to be a learning experience for all. Bands and fans alike. There is a punk rock for everyone.