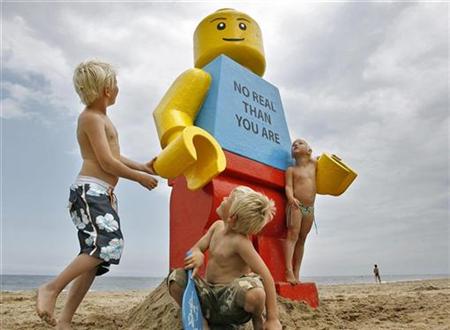 Lego man to the rescue!

With a picture like this, how could I not post something about the fact that an 8-foot tall Lego man was found bobbing in the sea?

The full story from Reuters:

A giant, smiling Lego man was fished out of the sea in the Dutch resort of Zandvoort on Tuesday.

Workers at a drinks stall rescued the 2.5-meter (8-foot) tall model with a yellow head and blue torso.

"We saw something bobbing about in the sea and we decided to take it out of the water," said a stall worker. "It was a life-sized Lego toy."

A woman nearby added: "I saw the Lego toy floating toward the beach from the direction of England."

The toy was later placed in front of the drinks stall.