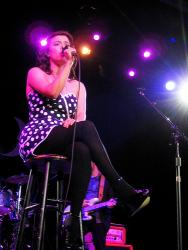 Lenka at the Triple Door

Last Monday night I was fortunate enough to catch the promising Australian pop star Lenka at the Triple Door. As expected, it was a wonderful evening.

Lenka is a lovely woman, about 30, who had just released her debut, self-titled album last Fall and was touring in support of it. It is a catchy and cute pop record that I’ve found addictive as of late – especially drawn to the single “Trouble is a Friend”. Listening to that record and Lenka’s harmonies, I was immediately reminded of Regina Spektor, just more pop-friendly and a little less avant-garde. Live, I didn’t see the comparison to my favorite modern singer-songwriter – but enjoyed her immensely nonetheless.

First up, though, was opener Gabe Dixon, a singer-songwriter from Nashville. He seemed like a nice songwriter with a soft vocal delivery. I enjoyed his set, where it was just him playing keys and singing for about half an hour, but was agitated with his choice of covers. I am usually bothered by ironic covers on principle because it is usually a snide joke against a pop audience from an elitist perspective. One thing that bothers me more than a performer choosing an ironic cover is when they can’t keep a straight face. Such was the case with Dixon, who went from Outkast’s “Hey Ya!” to Elton John’s “Tiny Dancer” but lost his composure somewhere before we were going to be asked to shake it like a Polaroid picture (a point he didn’t get to before switching to “Tiny Dancer”).

Lenka, though, was a much different story. She’s lovely and her songs are cute and poppy – completely crush-worthy. She came on stage about 8:30 and opened with “Trouble is a Friend” – and playing with a full, four person backing band and in the warm confines of the Triple Door, the song sounded huge.

Because the Triple Door is likely to be an unusual stop on a tour with its gorgeous interior and friendly atmosphere (and seats), it differs from most club shows, I’ve noticed many acts remark about its fancy décor but Lenka’s remarks might have been the funniest, saying she “felt like a gangster’s moll in this joint”. Later she added that the spot could be “my favorite venue I’ve ever played in”.

If this show wasn’t sold out, it was very close and the crowd seemed to be very receptive to her pop songs and several people sang along with the choruses to “Trouble is a Friend”, “The Show” and “Don’t Let Me Fall”. The show wrapped up about quarter to ten.

As with most new artists, they don’t have a huge catalogue to draw from but this night Lenka played every song on her album, a b-side and two covers. Of the two, I preferred her take on Modest Mouse’s “Gravity Rides Everything”. It started out with slow, sparse instrumentation – a very hushed melody – over her fragile harmonies before slowly building up to a bigger, expansive sound. The other cover was the final song she played, M. Ward’s “Vincent O’Brien”.

“Bring Me Down” had the biggest sound, with a big band melody and horn section (ok, one person playing a French horn). Lenka joked that it only had a “lack of dancing girls”.

The night was wonderful, overall. The show was quite enjoyable and the seats my friend and I had were incredible (in the very front, center) and we had seen someone who will become a big star in a just world. Leaving the Triple Door Monday night, I noticed the largest crowd I’ve ever seen there waiting in line slowly to go to the merch table after the show, for what that’s worth.

After the show, I met a very nice photographer named Kirk Stauffer who was kind enough to let me post one of his photos from the night. I really love this photo – and will take any opportunity to post photos of the stunning and photogenic Lenka. 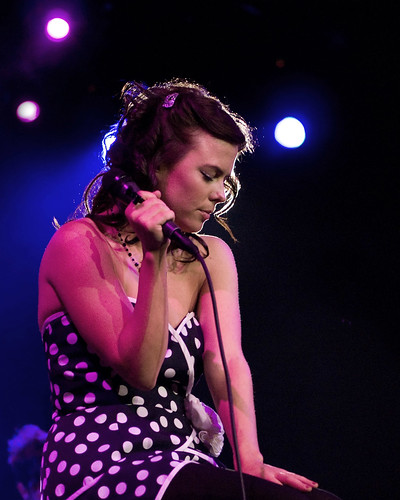