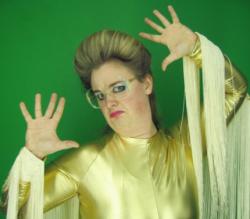 Leslie and the Lys with Team Gina and Scream Club

Imaginary writer Cal and his special lady Stacia consider themselves white-bread, middle-of-the-roaders who have recently had their life changed by midwestern gem-sweater rapper Leslie Hall.

Stacia: Two years ago I came upon the website of (and quickly fell in love with) Iowa-bred Leslie Hall — the "Keeper of the Gem Sweater."

You can imagine how thrilled I was to discover that my beloved queen of the gem sweaters phenomenon had developed a new talent — that of a singer! When I found out she was performing, I frantically searched the web for evidence of what would surely be an intriguing performance.

Cal: Stacia and I searched Youtube to find that the Gem Sweater girl more than “performs” – she raps. She raps about, well, her gem sweaters, her gold lamé pants and other stuff. She is quite the decent rapper.

Stacia: Fast forward to Friday March 31st, when Cal told me that he had surprise plans for Sunday night, April 1st.

Cal: Scrolling through the day's events on the TIG website, something caught my eye, in fact, caused my eyes to bulge. Stacia's beloved Leslie Hall was performing. Opening for her was a group I had recently read about, Team Gina. Team Gina is a lesbian duo who rap about random things such as being into "butch" girls and "gansta-acting" boys from the suburbs. Even with this information, I still didn't know what to expect from the show.

Stacia: Sunday night, we arrived at El Corazon and I was still in the dark. I looked at the crowd and became immediately confused. What was the deal with the big hair and strange sweaters? Why are people acting happy instead of trying to be cool/ironic? Cal suggested I look at the poster behind me (while we were waiting in a tremendously, hideously long bar line) and my eyes spied the prize: we were seeing Leslie and the Lys! Be still my heart. I jumped up and down, giddy with joy. Opening the show were two groups that were new to me, Team Gina and Scream Club.

Cal: Team Gina, a rap duo from Olympia consisting of Gina Genius and Gina Bling, were awesome. They had Stacia and me rolling with laughter through the entire show. Their music came from a laptop that Gina Bling kept going back and forth to to switch up songs. The beats reminded me of Peaches, while the lyrics were something between Bloodhound Gang, Run DMC, and the Go-Gos. Team Gina posed in unison, danced in sync, and all the while did it with flair, maintaining a tongue-in-cheek style. The audience (and we) loved it.

Stacia: Next up was Scream Club. Admittedly, we missed the bulk of their performance due to the aforementioned outrageously long bar line. Their hip-hop stylings are more vocally aggressive than Team Gina, but the mood was tempered by their amazing outfits, which included gem studded shawls (?) presumably in tribute to Leslie and the Lys. While not being familiar with their music prior to the performance, they were reminiscent of The Fitness, with a rap vibe. While researching them after the show, I listened to the tunes on their MySpace page and particularly enjoyed their description of their sound, “We sound like what would happen if Peaches and Mike D had a love child, and if Biggie Smalls was the Godfather and if our cousin was Darby Crash.” While I don’t know that I agree with their take, it was a good show.

When Leslie came on stage, you could feel, and hear, the love that people have for her. Stacia who kept turning to me and saying, “This is awesome,” and “I love Leslie.” I have to admit, after a couple songs, I kind of loved her too. I’m not sure if it’s the huge grandma glasses, the gold spacesuit, or the gusto she sings her ridiculous lyrics with, but I couldn’t help but appreciate her style.

Stacia: And the show was all about style. Mixing the shininess of Vegas-era Elvis and the bravado of a drag queen, Leslie rocked my world. At one point she even invited two sturdy looking audience members up on stage to support a 2×4, while she suspended herself from the middle and sang while hanging upside down. How kick-ass is that?

Cal: She actually hung from a harness suspended from a 2X4 supported by two giant dudes’ shoulders, kicking her feet in the air and spinning around, singing about writing a hip-hop album while wearing gold spandex pants. She then brought people from the crowd onstage who came to the show off their gem sweaters. She awarded these “Junior Gems” (the sweaters, not the fans) certificates of authentication before launching into her biggest “hit” about the clothing that made her famous.

They're coming back (say what, say what)
They want your babies (junior gems, junior gems)
Put them on (what, what?)
You lovely ladies
Wear your Gem Sweaters

Leslie, I believe. And so should you.