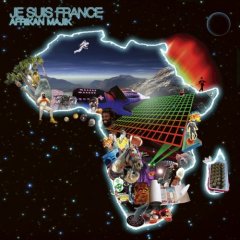 Je Suis France, AKA the France, seems like a fantastic concept. Although based out of Athens, GA, the band is comprised of a group of musicians that live and record privately around the country, and then come together as a collective to intertwine their creations into unique, experimental compositions.

This works well throughout Afrikan Majik, which impressively spans multiple-genres and moods. From djembes to electronic loops, Je Suis France transition from eight-minute plus moody krautrock jams, such as the song “Whalebone,” into tracks like “Virtual Heck,” a conventional garage nugget splashed with Neutral Milk Hotel.

Though the album is titled Afrikan Majik and the cover art is drenched in all things Motherland, the overall record sounds more like the Fatherland. Tracks like “Wizard of Points” pull heavily from the German post-psychedelic prog-rock of the 1970s and from the early electronica of German pioneers Kraftwerk. But I guess "German Majik" doesn’t have quite the same effect unless you’re selling sausages.

While the diversity on the record is refreshing, it does take away from the overall continuity of the album. It’s hard to transition from passively listening to the trance-like soundscapes of “Feeder Band” into actively absorbing the lyrics and pop-driven instrumentation of “The Love of The France.” No matter how rich and unique each song is on this album, Afrikan Majik fails to lock the listener in from the first on. I actually left the room halfway through “Sufficiently Breakfast,” the album’s sixteen minute opener, to make myself lunch and was able to come back with enough time to hear the last two minutes of the song.

The France is at their best when they can restrain the experimentation into a verse-chorus-verse formula and let the clever lyrics carry the song, such as on the tracks “California Still Rules” and “101 Miles and Runnin.”

While the sheer latitude of the sounds on Afrikan Majik will undoubtedly turn off some listeners, approaching this album with an open mind will lead you down a road as quirky as it is diverse.