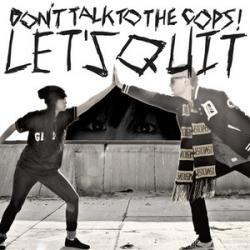 With deep-swizzled DJ (and fellow Mash Hall brother) El Mizell, their full length Don't Talk to the Cops! non-viral debut album Let's Quit sounds at times like a really messed up Rolling Stones jam from 1975 ("Murder Burger"), its DNA mutated with the Flying Lizards and Pussy Galore, bles sputtering like an Irish American Pogue raised on Too Short and the Beach Boys. These aren't frat kids with a clothing line, these are trailer park jesters who just robbed the pharmacy and are living like Seattle Scarfaces. Emecks' smart-ass, surreal verbal bumper stickers would sound perfect on the back of a Manson family dune buggy parked out side Laurel Canyon. It's sunny as being in LA on a card counting back room gambling bender and only grim if you weaken. The drum machines never stop hitting you in the face and funny bone, from "Hey … Don't Eat Those" to "Buy Me Drinks!" to "Tattoo My Name." It's like the world never changed after License To Ill, but just kept getting better for the punks.

This is a dense splattering of inside jokes, jacked up xylophone joy, so much swag it spills over when the neighbors walk by. It is infectious and as deep as the first Ramones album, that is if the OC Notes could have guested on it as well and there was one less song about being a knife-wielding male hustler. Buy this CD or you will have to do jury duty at their trials; oh hell you probably will have to anyways. Only thing missing is a big old ballad like "I Need Love." Or a satire of it. But I don't want to give these art-terrorists any ideas or anything. They got plenty of their own up there, swimming like Coney island whitefishes.