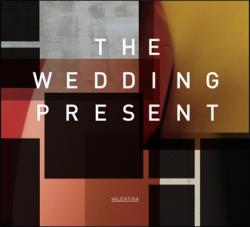 Andrew Boe April 3, 2012 no Comments
For an artist as prolific as David Gedge is, with nearly thirty years' recording history under his belt, it is a bit strange to think that the new Wedding Present album, Valentina, is only the band's eighth studio record. Of course, there are numerous singles, EPs, and live albums as well, not to mention the wonderful and underrated albums released by his other project, Cinerama. With that in mind, this is probably closer to being his twelfth full-length studio LP. To be candid, a new release by Gedge is always welcome, however, the more enthralling news is that The Wedding Present is currently on tour in the US playing their 1991 masterpiece, Seamonsters, in it's entirety. The band will be performing in Seattle at The Crocodile this Friday, April 6th. This show is highly recommended as Seamonsters is an incredible record containing everything that a magnum opus should: pain, animus, regret, melancholy, fear, betrayal, doubt, grit and fire. In other words: it is an emotionally bare recording, effectively projecting the sheer essence of longing and heartache that few have managed to capture.
Valentina finds the Wedding Present well beyond the circle of angst that surrounded Gedge in 1991. The subject matter of failed relationships and a double-standard perspective remains the same, but the cathartic motivation behind disconnected love has been absent for a while. 2005's lovely Take Fountain still had it and then the following album, El Rey, felt rather removed from veritable turmoil. Valentina follows suit with more humor and less personal discord. The lead single, "You Jane," is a sprightly, jangling number that is catchy, but cannot be compared to the spleen of a song like "Kennedy." There are some beautiful moments interspersed throughout though. The introduction to "Mystery Date" is quite somber, sounding reminiscent of Cinerama. When the accompanying instruments join in, Gedge sings "This does not happen to me," with conviction. There is also some ragged electric lead guitar on this song. It just seems that these moments are becoming fewer on the recent records.
Contrarily, Seamonsters is a scorching affair. The poignant "Dalliance" rages with incendiary electricity. The track builds and builds until a final culmination of exploding guitars and cannon drums ignite from inside it's viscera. "Carolyn" is one of the album's greatest tracks. The poppy guitar and drum combination are catchy, but in a somewhat mournful manner. And then there is the angry outro guitar section, one of the best moments of their career, which sounds a bit like The Velvet Underground. In the album's closing track, "Octopussy," the piercing anguish in Gedge's voice when he sings "You don't take away my hand, like you ought to/You've become my family/I don't want to understand why I need you/You've just become my family," sends shivers down the spine. In between, there are several other indispensable songs as well. It is certainly their dark and disquieting apex.
With these two records, distributed from differing ages and perspectives, The Wedding Present will treat the audience to a range of their repertoire on Friday evening. David Gedge has always had the ability to make you laugh one moment and then cry the next. This is one of these reasons why his music has been so intoxicating over the years. Commiseration is sometimes your only friend, and The Wedding Present is a band that anyone who has ever loved and lost can embrace with uncanny abandon.