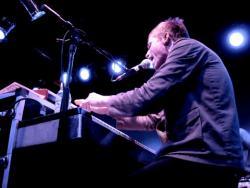 Like wild animals, Feral Children and White Rabbits cause a commotion

The Feral Children and White Rabbits (shown above) are two groups who are at their best calibur during their shows; their music and talent cannot truly be believed unless witnessed in person. Both are heavily instrumental bands with a multi-percussionist backbone, and both have a fiercly spirited way of playing their version of indie rock. These bands brought their sound to life Monday night at the Crocodile with a vivacious enthusiasm.

A feral child is one who grows up isolated from human contact, in many cases left to be raised by animals, and often never learns any languages or society’s rules. They live a life based on survival instincts and needs; it’s a raw, primal state of being captured wonderfully by the music of Seattle’s own Feral Children.

Having never seen them play a show before, I was pleasantly surprised. Their songs are filled with layers upon layers of untamed guitar effects, piercing keys, and white noise. The vocals, which are often gutteral shouts or repetitive “oohh oohh ohh” lines, seem incomprehensible at times. There’s a lot going on here, but it all subtly comes together like a pack of wolves stalking its’ prey. And they kill it – playing seamlessly into each track on their setlist without hesitation, attacking the drums relentlesly, and never loosing their momentum.

Unlike the Feral Children, Brooklyn’s White Rabbits are a little less experimental and a little more power-pop. And while their sound is similarly lead along by viceral drum beats and dual drummers, the vocals are more pronounced and prominent here. The Rabbits’ lead singer, Stephen Patterson, sings with punk-like tendencies and an air of desperation as he sits and plays the piano with quips like “where do you get off / and how can I get there too“.

And as the Feral Children often draw comparisons to a young Modest Mouse with all of their eccentricities, the Rabbit’s bear a resemblence to Spoon – mostly due to a heavy influence by their latest album’s producer (and Spoon singer/guitarist) Britt Daniel.

Highlights of their fastly paced set included “While We Go Dancing” (one of the few tracks they played from their first album, Fort Nightly), “The Plot”, and the popular “Percussion Gun” from It’s Frightening. They also made a very quick return to the stage for an encore that had Patterson up from behind the piano and joining in on the drums. Impressivly, it seemed each member of the Rabbits were adapt at playing many different instruments (even a tambourine and a maraca), and they each had their hand at thumping out some notes on stage.

In short, the audience at the Crocodile ate up the Rabbits, loving every morsel of adrenaline flavored rhythm – and I’m so glad I have a new-found appreciation for the Feral Children.