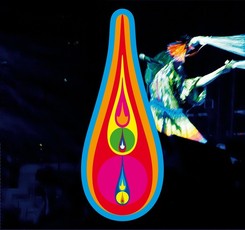 Bjork's Voltaic: The Volta Tour in Paris is, as far as live concert films go, is a dazzling experience to watch. It is screening this weekend, twice, at the Northwest Film Forum on Friday and Saturday night (June 26 and 27) at 11pm.

The Icelandic, anti-pop princess is given the star treatment she deserves in this often remarkable film. It is all replaying a 2008 concert in Paris. While not showing any backstage footage or put into any context, it just shows a fantastic Bjork performance that couldn't see, even in the very front row. Bjork doesn't even say anything beyond "merci" between songs. Because of that, it may be a little difficult to convert those who aren't already drinking Ms. Bjork's Kool-Aid, but like her catalogue as a whole, I'm not sure that there's an appropriate starting point and the best way to become acquainted is to just dive in head first.

The colors are gorgeous, especially with how Bjork's loud costumes contrast against the mostly black background. Solid, primary colors like reds and blues are played against the dark concert hall and it's quite vivid. You can also see details like Bjork walking barefoot across the stage and the expressions on her brass section's faces.

About two thirds in, she gets to playing "Army of Me", with her pitch perfect melodies, fast tempo and even quicker cuts that bounce around the room, is a showstopping performance. And then she does it again fifteen minutes later with "Hyperballad".

It's an elaborate performance, lovingly filmed by director Russell Thomas, of one of music's most enigmatic artists and it's compelling throughout every one of its seventy-one minutes.

{Bjork's Voltaic: The Volta Tour in Paris plays at the Northwest Film Forum on Friday, June 26 and Saturday, June 27, with both screenings at 11pm. Tickets can be obtained here.}