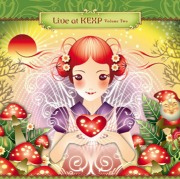 There are two things a great compilation album can accomplish: it can either round up the best songs from important bands, either established or emerging (or both), or it can be a statement in itself. That statement could represent a different place (maybe where the music comes from, or maybe the utopia it wants to create). For example, when San Francisco label Alternative Tentacles released Let ‘Em Eat Jellybeans in '81, I realized I wasn't the only punk rock kid convinced we could make our own art, and didn't need New York or LA to do it for us, and so that record was as genuine to me as anything by the Clash or the Last Poets. A well-chosen anthology can be one of the most important albums in your collection.

Live At KEXP: Volume Two is a great compilation. Its sweet green CD design houses 20 vivacious in-studio live performances of some of the greatest tunes available in the independent music world right now, from Sleater-Kinney's agit-prop "Jumpers" to The Decemberists' twisted and sad "We Both Go Down Together" to Lyrics Born's goosepimple-raising "Callin' Out" to Common Market's terrific local call-to-arms "Connect For." Every variation of underground pop is on display here, so many of them must-own, transcendent versions. MIA's sexy, electric recreation of her own "Galang" is worthy of purchase alone. When you combine a track listing of these kinds of artists and songs, a collection like Live At KEXP is utterly irresistible.

But there's always ambivalence towards anthologies, having to do with the album-as-art mythos created by the singer-songwriter cult of the 60s performers. How could a disc full of different voices, especially one that is made up of bands from all over the country, be unified in vision and feel? There is unity here, represented at the close of the set by the gentle visionary politics of Patti Smith and Lenny Kaye's "People Have the Power."

The generosity of spirit in Live At KEXP: Volume Two represents the mature, loving, intelligent tastes of its compilers. Sure, there isn't a whole lot of hard rock (a gnarly updated Gang of Four and a ferocious Skullbot represents here though), and the compilation doesn't contain a lot of edgier, out-of-control performances. That is probably because out-of-control is created out of distrust and conflict, and KEXP have made an elegant listener-supported radio and Internet radio empire out of the best of the eclectic and accessible. The artists aren't looking to trash the station's equipment — they're using it all for a higher calling.