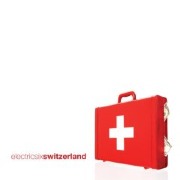 First off, I'd like to congratulate the sheer volume of Electric Six releases this year in the United States. It's a testament to your work ethic that we not only were able to enjoy Senor Smoke, but also your new album Switzerland. Clearly, you have a lot to say musically and are not afraid to let us know. However, there are a few things that trouble me greatly and I'd like to discuss them with you.

Mr. Valentine, did you lose your "fun"? There seems to be a dearth of it on Switzerland, so I worry that you may be feeling down. I can understand the pressure to be deemed a legitimate artist, but is the Electric Six really a vehicle for this sort of classification?

While Senor Smoke led off with a real roof buster ("Rock ‘n Roll Evacuation"), you seem to back into Switzerland with the oddly Eagles-like ballad "The Band in Hell." What a yawner! At least "I Buy the Drugs" is a little more tongue-in-cheek, as if Barry Manilow didn't write the songs but instead, well, bought the drugs. However, again, it just doesn't have the life and spunkiness we expect from your Six. Some of the songs are just downright bland, like your Revolting Cocks-meets-Foreigner "Infected Girls" or "Rubber Rocket." Are these songs merely here for the shock value?

You make up some ground on "Pulling the Plug on the Party," which sounds like your tribute to the Strokes or Franz Ferdinand. Nicely done! The same goes for "Pink Flamingoes."" I mean, my pink flamingoes keep pecking at her heart" set to an oddly Old 97's rhythm is brilliance. However, too much of Switzerland is bogged down with your filler numbers like "I Wish This Song was Louder," which feels like a Weird Al parody of a Spinal Tap parody. That's really all we need: parodies third removed! And "German's in Mexico"? Are we finally getting political, only about 60 years too late? Oh Mr. Valentine, sometimes you feel like a poor man's Tenacious D, which in itself is a poor man's Spinal Tap, which was a poor man's Styx. They are a joke, right? I mean, come on, "Mr. Roboto"?

In a perfect world, there would be a way for you to head backwards in time like a latter-day Doc Brown and combine Senor Smoke and Switzerland into a single opus. Well, maybe not an "opus" but at least some sort of well-balanced alterna-comedy album. You could feel some real pride for that. Well, maybe not pride, but at least less shame. Your Switzerland just makes me sleepy most of the time — I hope that wasn't your goal, Mr. Valentine, because I know you could be so much more.

I just wanted to let you know how I felt about you and your Electric Six and hope you're doing well.