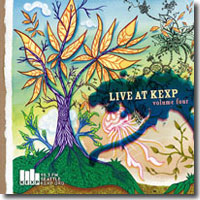 For a perfect sampler of the contemporary non-mainstream rock radio aesthetic, and rare versions of what's out there to boot, this is an essential holiday purchase (and only available for purchase through 12/31/2008).

This fourth volume of the Live At KEXP series is possibly my favorite in the series, because not only is it filled with inspired in-studio recordings from many of the best artists the beloved radio-Internet station has in rotation, but it flows with a particular rhythm and cadence that is both what makes these bands great on their own and why their strongest songs stack so well together.

Yes, Fleet Foxes and Vampire Weekend are here (be rather silly if they weren't, but the VW song is going to force me to buy the album now, after a long time of being on the sidelines in its hype-backlash war), and The Hold Steady is as well (with one of my favorite tracks of theirs already), but so is Sharon Jones and the Dap-Kings and Elbow's current single. Like with KEXP's broadcasting itself, it's a combination of the most progressive and appealing current indie music styles mixed with timeless and/or mature cult band presences.

One could fantasize about the Live At KEXP series having more tracks from some of the brilliant, more marginal DJ voices (shouldn't the Roadhouse and Sonarchy have limited run releases themselves, on 180 gram vinyl? Greg Vandy interview Books On Tape?). But this compilation is in no way pedestrian or redundant, as it turned me on to several performers/groups I don't always catch when listening to my favorite DJ shifts (Angelique Kidjo, Pela).

There's lots here, and if I'm still craving more, it's probably because someone is doing something right in the first place.