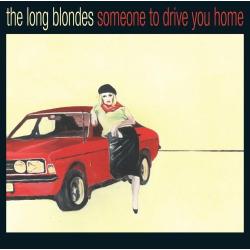 Someone to Drive You Home

It is very hard to not like the Long Blondes. For one, they have a lead singer that is very easy to look at (Kate Jackson). For another, they’re the musical children of Pulp, hailing from Sheffield and even produced by an ex-member of Pulp (no, not that one, but Steve Mackey). And to top it off, they’re jumped in with Art Brut in producing completely infectious post-punk pop-rock that is so loose that you wonder if it took any effort to record the songs. Their debut is finally getting is due stateside, and Someone to Drive You Home, although not perfect, is a real treat mixing the current brit-pop with 80’s modern rock and mid-90’s pop-punk into a delectable entrée.

Much in the same way that Art Brut’s Bang Bang Rock N’ Roll hit hard and mercilessly, Someone to Drive You Home is unabashedly rock and roll from start to finish, singing about sex and partying without any shame. Heck, the album opens with a song called “Lust in the Movies” where we fine Kate doing her best to sound like the former queen of brit-rock seduction, Siouxsie Sioux, she pretty much purrs out the verse until the chorus kicks it out of the way and she shouts I just want to be a sweetheart! Indeed!

The tempo doesn’t let up into “Once and Never Again” and we find Kate doling out advice like you’re only 19, godsakes, you don’t need a boyfriend (of course, you find it hard to believe when she sings you know I'm not so young/I spend an hour getting ready every day/and still I end up looking more or less the same). The song has a very clear early No Doubt feel (right down to the similar vocal quality between Kate and Gwen Stefani) and really, this is not a bad thing.

There is an Smith’s-like quality to Dorian Cox’s guitars on many of the songs, like “Only Lovers Left Alive” and “Giddy Stratospheres,” where Kate lets her vocals sound a little more natural, arching up and down while the song jumps from its dreamy verse to the dance-like chorus where Kate sings she’ll never take you to giddy stratospheres like a rock-oriented Pipettes.

You listen to songs like “In the Company of Women,” where Kate professes her insecurities ("you wouldn't lie to me now would you?") over the Banshee-like melody, and you begin to get an idea of the promise of the band – they’ve really gotten the modern rock song down to a science and it's only their debut. I could try to describe every moment that they pretty much rock your socks off, like the girls of the band shouting various British highway numbers on “Separated by Motorways”, but it would just take too darn long, but never has so much rock fun been had shouting road numbers.

You know the band has it’s stride when you make your way to “Weekend Without Makeup,” where Kate’s Siouxsie channeling is dominating as the song builds piece by piece into a rollicking chorus where Kate sings There are wants and there are needs and they're two very different things (which should be a crime to make me think of Kate’s wants and needs). “Five Ways to End It” has a more new wave feel to it, with swirling keyboards and a more dance-rock beat, but it works just like anything else as the real chanteuse in Kate kicks in, cooing out the lyrics over the melody.

The Long Blondes excel at songs that have a lot of manic energy so its not surprising that they fall a little flat on the ballads like “Heaven Help the New Girl,” which are nice enough but really feel out of place almost until the tempo is kicked up towards the end, rescuing a sappy ballad from an watery grave. Beyond that, it is hard to find fault with Someone To Drive You Home, even with the additional tracks thrown on the U.S. release of the album – the Long Blondes have the rock song down. You have to appreciate the down-and-dirty feel on the closer, “All Bar One Girls,” an ode to man-eaters in the bars with a thumping bass-line and a glam rock sound, shredding Kate’s vocals over the howling guitars – it’s downright sinful just to listen to the track.

Someone to Drive You Home might not seem that special the first time you pop it in, but with each successive listen you begin to realize the gem you have in your hands. The songs act like sonic contagion, working its way into your system until you can’t get rid of it – not that you’d really want to anyway. Just goes to show that really, some bands just know how to rock from birth, and the Long Blondes are just such a gifted child.