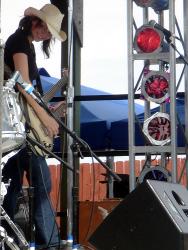 Viva Voce’s Sasquatch appearance on Saturday took place on the Yeti Stage, which was essentially located in the Gorge food court. It was as if the organizers of the event decided “Well these people are going to have to stand in incredibly long lines to buy overpriced food, we may as well let them rock while they’re standing there”. The perfect accompaniment to a bad gyro on this day was Portland’s Viva Voce.

I got to the Yeti stage a little late and missed the very beginning of their set, but in time to witness them tear into “Believer” and “So Many Miles”. These two tracks exemplify all that is great about Viva Voce, the fact that Kevin Robinson can play drums and play other instruments at the same time (harmonica in the case of “Believer”), and the huge guitar riffs that Anita Robinson lays down with just the right amount of distortion (as well as being able to writhe around with her guitar while keeping her cowboy hat).

Viva Voce culled a set list exclusively from their latest album Get Yr Blood Sucked Out and played each song with the tightness that one achieves when touring non stop in support of a record for the better part of a year.

Kevin’s voice was a little gruff this time around, giving it a little bit of a rough edge. This gruffness was especially evident in the closing song of their set, a cover of Alan Parsons Project's “Eye in the Sky” like you’ve never heard it before: Kevin half singing and half William Shatner style spoken word, “I am the eye in the sky, looking at you, I can read your mind.” Turns out they recorded “Eye in the Sky” for a recent compilation album of arena rock covers entitled Bridging The Distance to benefit P:ear, a Portland non-profit that helps the city’s transitional youth through tough times. Along with Viva Voce there are tracks form other Portland related artists such as The Decemberists and The Dandy Warhols. Good tunes and a good cause, you can’t beat that. I’m hoping that on Bridging the Distance II, or whatever the follow up is called, we’ll get a Viva Voce version of “Jukebox Hero.” “Just one guitar” it’s all Viva Voce need to bring the house down.