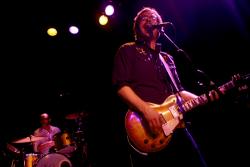 The Plainest Words Are the Finest: The Long Winters

How do you know when it's True Love and not just infatuation? For me, it's when you can see the same person day after day for years, and never stop feeling those first thrills. It also means you find something new and fascinating to fixate on every time you're together.

I fell in love with Seattle band The Long Winters with the release of their first record The Worst You Can Do Is Harm back in 2002. It was the soundtrack of launching the Three Imaginary Girls website; indeed, the idea of TIG was born at a Long Winters show. If you go to the Long Winters band page, you will see that we've already written 15 live show reviews about the band. Fifteen. Even I think that's a smidge ridiculous.

I hemmed and hawed about attending tonight's show, a homecoming for the band, who have been touring for the past six months. Would it still be love? Would the spark still be there? Could we have run out of things to say to one another? I had my reservations, but it quickly became evident that they were unfounded. This homecoming show was the Long Winters at their very finest, and I am full-to-brimming-over with assured True Love for the band now.

The night gave everyone plenty to love. The show opened with a bombastic, nearly arena-rock-like intro, with three horn players (called the Longhorns, get it?) joining Long Winters Eric Corson (bass), Nabil Ayers (drums), and Jonathan Rothman (keys, guitar) and building a slow, heated frenzy for their frontman, John Roderick. It was kinda bizarre and yet fitting; when you come home and sell out the Showbox for the first time, you deserve a huge rockstar intro like that.

Roderick announced early on that the band "has been touring since 1986" and since they were so happy to be home, they'd be delighting us with an extra long set. He wasn't kidding. We got 20 songs — over two hours of entertainment — and I could have stayed even longer. They dove right in with a few of my all-time favorite Long Winters tracks ("Fire Island AK," "Stupid" — possibly my favorite pop song ever — and "Scent of Lime"), during which time I geeked out with the other superfans in front, singing along at the top of our lungs and generally acting like very happy dorks.

Roderick had loads of hilarious banter as usual, joking about the time years ago when he got kicked out of the Showbox and then literally kicked by the bouncer, but he also seemed genuinely thrilled to be back at home and playing in front of such an adoring crowd. They also seemed honestly thrilled about Merge Records band The Broken West, who opened the show tonight and for the past few weeks of the tour. {imaginary aside: they were a fantastic choice for opening and we dug the set too. I will save their praise for another review though.} He also let us know that the show was being recorded for a DVD, to great cheers and yelps from the crowd.

Then, about halfway through the set, Roderick announced the start of the special guests. In addition to the Longhorns (a sax, trumpet, and trombone trio who played with the band on about 6-7 songs throughout the course of the set), the Long Winters had some friends join them onstage. First up was Anna "Anna Banana" Lange from the Pretty Parlor singing backup vocals on "Cinnamon" with her main squeze Eric (in the cutest little navy and silver square dance outfit this side of the Mississippi!).

Next up, Roderick called Death Cab for Cutie frontman Ben "Love the new specs" Gibbard onstage, where he hopped onto the drumkit and banged away to "Carparts." He did a damn fine job of it (and we got a photo of Mr Gibbard on the skins from our pal Heather Hydra.)

They concluded the night by doing something I never thought I'd see: they melded my mad love for the Long Winters with my hot infatuation for 70s AM Gold soft rock by covering Chicago's "Feeling Stronger Every Day" for their finale. "We don't normally do covers, but we have a horn section, so we learned a Chicago song, featuring the dulcet vocals of Mr. Peter Cetera."

Bravo! This is how I know my relationship with the Long Winters is True Love Always: they make the musical dreams I didn't even know I had come true.