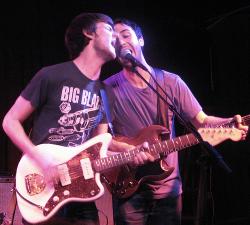 Last Saturday Neumo’s played host to a groundbreaking lineup of stellar performances. It was a night of firsts, of resounding youth and energy, and of surprisingly lavish tour buses. It was Seattle’s raucous welcome to the Welsh indie-pop sensations Los Campesinos!, who had finally made their way across ocean and land to visit us.

Opening for Los Campesinos! was a darling duet called the Special Places. Rumors had been making their way around TIG that Tullycraft was, in some shape or form, going to be the opening act for this show. Little did we know that this rumor would manifest itself in such a way. The Special Places was made up of stylish Tullycrafters Jenny Mears and Corianton Hale. It was their very first performance in their new band, which they claimed came into being as of 10:30 AM Friday morning.

The sound of the Special Places was a little less twee than Tullycraft, with a hint of country at times. They used a glockenspiel, a ukulele, a guitar and their own pretty harmonies to play the set list comprised of a few original tunes, one Tullycraft song, and one Metallica cover. In between each song was the same cute and witty banter that make Tullycraft shows so much fun. I can already tell these fresh young upstarts are going to get huge pretty soon.

Next up was Parenthetical Girls, a Portland band with a taste for theatrics. With no introduction, the group began their set with a spacey synth that filled the small venue. This was soon accompanied by a timid xylophone, whose plinky melody created an atmosphere reminiscent of a far Eastern shrine. And then the singer descended. Into the audience with a single drumstick, vocalist Zac Pennington wandered on his knees through the crowd, which split for him like the red sea. We watched as he made his way methodically through us, banging his drumstick hard against the floor, with wild eyes and gestures. He looked like a blind beggar, or a holy man asking for alms. In fact throughout the set there seemed to be a vaguely religious undertone.

It was immediately obvious that the band was from Portland, not only because of their classy dress but because of their extremely intelligent lyrics. Their sound was full and lush, if perhaps an acquired taste, and their performance was very visual. I would highly recommend them, ambassadors from Lit Rock capitol of the world.

The main attraction was, of course, Los Campesinos!, who rode into town in grandiose tour busses that the Parenthetical Girls mentioned (more than once) were worthy of envy. The audience swelled for the headliners, and they did not disappoint. With boundless energy and a sound quality almost as good as on the album, Los Campesinos! delivered their fast-paced pop flawlessly. The band was energetic and enthusiastic, and really knew how to play to their audience. They won us over not only with their danceable and witty songs but also with flattery, saying that their favorite bands come from the Seattle area and they were excited to finally see our city.

The lead singer (who was wearing a Casiotone for the Painfully Alone shirt; ironic because CFTPA had a show that night across town at Vera) had all the flailing motions on stage of Seattle greats Tullycraft, which enhanced the screaming and earnest vocals. Los Campesinos! played a solid set, complete with encore, with songs from recent full length Hold On Now, Youngster… and their popular 2007 EP “Sticking Fingers Into Sockets”. The crowd was moved to dance frequently, most noticeably on my personal favorite “You! Me! Dancing!”.

Their witty banter was made even more so by their adorable accents and one line in particular made me smile: “Some dear Seattle…ites…is that what they’re called? Seattleites? That’s cool, that is cool.” I think, yes we are pretty cool, it was very nice of Los Campesinos! to notice.