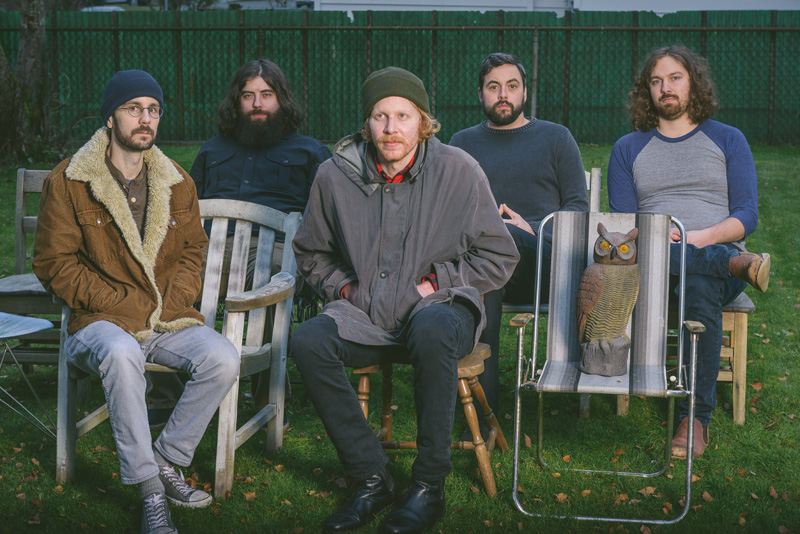 A Love Sleeps Deep by The Moondoggies

The Moondoggies come from a layered place. Marine air gathers over Everett, and the clouds pile up. They might on occasion roll in off the water, weaving with air masses captured on the west side of the Cascades. And if that happened way more than it does, The Moondoggies might engage in what Keith Richards calls “the ancient form of weaving,” where riffs bounce off each other and propel you forward as the weave thickens. What The Moondoggies do instead is layer: Guitars pile. Voices pile. Motion forward presses ahead. The layers jostle.

I mean, this is a land of layers. We layer up for a rainy day. We layer up for winter, for spring, for fall. Detritus piles up, layers our landscape. That’s a rainforest, after all: Layers. The key points of depth might lie below another layer, say a warm glow of Fender Rhodes piano (to wit: “Stop Signs” from their third album, Adios, I’m a Ghost). Beneath that temperate color, a rougher thing might hide, a tougher truth: “Scattered memories in our wake / There’s nothing left for us to take / Find a peaceful place to die / Won’t go out like Bonnie and Clyde.”

That’s The Moondoggies, too, a thicket, a build-up of Kevin Murphy’s guitar and Caleb Quick’s keyboard as Murphy chests out the band’s lyrics and backing vocals wrap around his voice. Although people have considered The Moondoggies part of a rustic Americana vibe, what they are is pretty unique: Not rustic and woodsy enough to wow the rootsy and not hard-driving enough to jostle the loud-fast crowd. Let this be clear: They deserve more, acclaim, sales, audiences, attention – more of all of it.

Just loan your ears the first 12 minutes of the band’s 2010 sophomore effort, Tidelands. It starts thick and textured and builds on the initial, unfussy heft. It does so almost unobtrusively, though. The shifts in time and the drop-in vocal harmonies mean the band can sound slightly like The Band, but the same could be said of myriad bands. Rustic, maybe, but not one-dimensionally. The Moondoggies add in more grit and even more brittle edges – sometimes right where you’d expect them to just up the volume.

And now A Love Sleeps Deep comes, five years after Adios, I’m a Ghost and after Murphy’s had a kid and scads of life experiences. Album opener “Easy Coming” starts with the line, “Lost my head there for a spell / I couldn’t sleep so well,” and the band is off, at a characteristic mid-tempo and with, of course, a layered sound. Guitar and organ ring clearly, distinct enough but still part of the ground-cover, a sonic density. And then Murphy settles in, “I wouldn’t change a thing.”

Of course, it’s still rock n roll. “Soviet Barn Fire” is where you find Murphy’s guitar in full rave-up mode, with another mid-tempo tug against it and vocals that layer together a shouting urgency and a characteristic wryness. Murphy’s clear on this: music and art today can be rife with a purposeful irony. He’s more prone to straight-up delivery. Layered, yes, but direct.