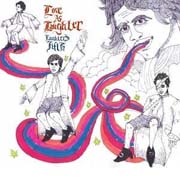 The ever-lovely Olympia (now New York City) group Love as Laughter, started as a Sam Jayne (vox, guitar, various-frontman-things) side-project after the breakup of his previous group, Lync. And the side-project feel sort of just continues on, with a guy whose voice is just freaking perfect for a rock band.

Laughter's Fifth, out now on Subpop, is a record of rock songs in the same vein as post-Pavement Stephen Malkmus. In fact, the opening track, "Amber," could be directly pulled from "Pig Lib." But a side-project feel comes from the whole thing, in that Love as Laughter is one of those bands with a lead-singer/songwriter. That these songs are entirely capable of existing with just a guy in a room with an acoustic guitar makes them slow to start, quick to rock.

"I'm a Ghost," for example, starts out with just an electric guitar line, and then the band joins in full-on to get the song a-rocking over the same riff, making it all the more, I don't know, like a big club rock band.

Naturally, that Jayne and company play singer-songwriter rock songs is not automatically a bad thing. Every type of music has the opportunity to be good. Some jazz is awesome, some jazz sucks, etc. And "Laughter's Fifth" might not be the "it blew my fucking mind!" record we're all constantly looking for, but it is the "this is awesome!" record we're also always looking for, but have better success at finding.

Jayne's voice—somewhere a combination of Malkmus and Geoff Farina of Karate—is honest and real, not too much training or concentration, but the raw emotion that makes rock and roll good comes through. ("Pulsar Radio" exists for most of the track just as Jayne, an organ and metronomic drum beat, exploding into a scream that's stronger than the later cymbals) In fact, the delivery of these songs might make them better than they really are. "Canal Street" is a fun tune about buying Louis Vuittons and "cards for your spokes" in New York, but really, the best parts of the song are the moments when Jayne's voice creeks like an apartment floor on "Even when you're down and out, you'll find a place to spend the rest of your money!" (It's a fun song to sing along to).

Most of the songs take a while to get going at full momentum, and the builds are down competently and coherently. Love as Laughter has been doing this for a while, and they've learned how to do exactly what they do, very well. Notably, "Every Midnight Song" starts a little slowly, and then the band gets going, gains momentum, and by the end it's just an all-out ROCK! fest. Love as Laughter is simplicity, done well. If you like good music, you'll like this.